Two time capsules have been planted at The Shrewsbury and Telford Hospital NHS Trust (SaTH) to celebrate the 10th anniversary of its specialist night team. 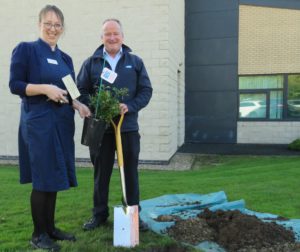 The Hospital at Night team has been marking its special milestone throughout the month in a number of different ways, including planting the capsules at the Princess Royal Hospital (PRH) in Telford and the Royal Shrewsbury Hospital (RSH).

The capsules contain the team’s philosophy, logo, a survival tips letter for new staff, a Trust values pin badge and a team picture.

Clare Walsgrove, Hospital at Night Matron at SaTH, which runs both hospitals, and her team were joined by Dr Arne Rose, Medical Director, and Barbara Beal, Director of Nursing, for the plantings this week. 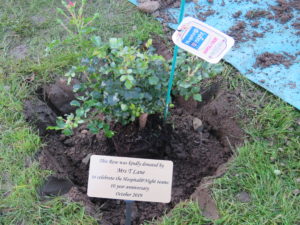 Clare said: “We wanted to do something special to celebrate our 10th anniversary and as a team we decided that it would be great idea to plant the capsules which contain everything that is important to us. We would like to thank everyone who helped us over the last month to celebrate and raise the profile of the team and the work that we do.”

The Hospital at Night team is a multidisciplinary team that covers both hospitals offering a comprehensive service directly aimed at detecting, assessing and treating a deteriorating patient throughout the night.