Four side rooms on a ward at the Royal Shrewsbury Hospital (RSH) now have televisions thanks to a kind donation from the family of patient who was cared for by staff there. 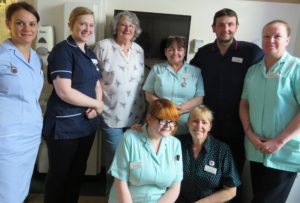 The smart televisions will be used by haematology patients who often spend long periods of time in isolation in the side rooms on Ward 23 (Haematology and Oncology), to help break up their long days. Two further rooms will also receive televisions.

It has been made possible thanks to a kind donation of £700 from Victoria Jordan, from Shrewsbury, made in memory of her husband Leslie. Mr Jordan, who ran his own roofing business, was a patient on Ward 23 where he was cared for following his diagnosis of leukaemia. The £700 was raised through donations made at Mr Jordan’s funeral.

Pete Warren, Ward 23 Ward Manager, said: “We decided to use the donation to put the televisions in the side rooms for our haematology patients, as they spend a lot of time in isolation. It can be a long day for them, so we thought that providing the televisions would be a good thing to do.

“It has made such a difference to our patients using the rooms and we are incredibly grateful for the donation, made in Mr Jordan’s memory.”

Mrs Jordan said: “Leslie was cared for on Ward 23, and would have been very happy that the donation has helped to buy the televisions for the patients.”