Skip to content
Home>Lizzie raises over £1,200 to celebrate being cancer free for 15 years

Lizzie raises over £1,200 to celebrate being cancer free for 15 years

A Shropshire woman has raised over £1,200 for the SaTH Charity’s Shropshire Blood Trust Fund and thanked her consultant for the care he gave throughout her cancer treatment. 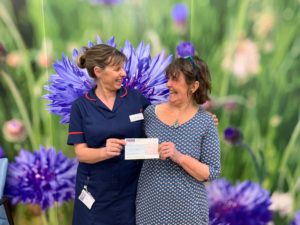 Lizzie Grocott-James received treatment at the The Royal Shrewsbury Hospital (RSH) and the Lingen Davies Centre which is part of the hospital, under Consultant Haematologist Dr Nigel O’Connor, and wanted to celebrate the 15th anniversary of her being given the ‘all clear’ from Non Hodgkins Lymphoma.

Lizzie, who lives near Nescliffe, said: “With a lot of help from brilliant friends I organised a celebratory- fundraiser with an a capella singing workshop, an acoustic jam session and a bring and share meal. Everybody pitched in in some way to make it happen and it was a great day that raised loads of money for The Shropshire Blood Trust Fund. Everyone had a great time and the fabulous generosity of so many people meant that much more money than I could have hoped for was raised.”

Going on to speak about her consultant, Dr Nigel O’Connor, Lizzie said: “He is a brilliant communicator, I have never met a consultant so respectful of their patients before.”

“It meant a lot to be able to have frank conversations with Dr O’Connor, and so I felt that at exactly 15 years since the ‘all clear’ it called for a celebration of my good luck. I’m delighted it all went so well and I feel even luckier now!”

Dr O’Connor set up the Shropshire Blood Trust, and the O’Connor Haematology Unit at RSH now stands in his name.

The charity made a £1.1million donation to help set up the Lingen Davies Centre at RSH.