A young superhero from Shropshire has been chosen to partner Invictus Games hero and Paralympian, Dave Henson, at December’s 2019 Superhero series – the UK’s only disability sports series for the everyday superhero – and is fundraising on behalf of two Shropshire hospital trusts. 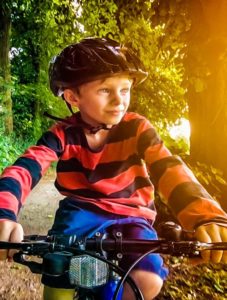 After smashing his challenge at the Superhero Tri in August, Tom McIntyre, eight, from Bourton near Much Wenlock, will compete this time with his mum and dad alongside Invictus Games hero Dave Henson. The team are taking part in ‘Celebrity Winter Wheels’, a race dedicated to all the amazing superhero families who provide the crucial love and support to those living with a disability.

The race takes place on 1 December at Dorney Lake, Windsor and aims to create fun, full-throttle mass-participation challenges where people with disabilities call the shots and don’t have to worry about cut-off times or equipment restrictions. Tom will run 1k alongside Dave Henson in the celebrity lakeside dash, partnered by his dad, James McIntyre, before taking on a 5k bike challenge partnered by his mum, Caroline McIntyre.

Tom was born with a rare condition called PFFD (Proximal Femoral Focal Deficiency) which means that his right femur is not growing correctly. At the age of one old he had his foot and ankle amputated to enable him to have a prosthetic fitted and when he was four he had part of his femur removed and his hip reconstructed. 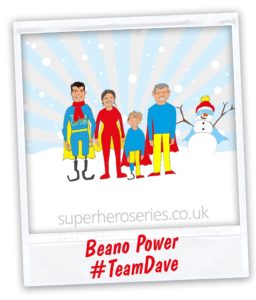 Tom’s mum Caroline, who works at The Shrewsbury and Telford Hospital NHS Trust (SaTH), which runs the Royal Shrewsbury Hospital and the Princess Royal Hospital in Telford, said: “I’m really proud of Tom and love the opportunities the Superhero Series has given him.

“Tom’s dad is really looking forward to running with him and Dave Henson, and then I get to be Tom’s sidekick cycling for 5km around the lake.

“It is 10 years this year since my father passed away at SaTH, and the care and dignity the staff showed him in his final hours made his passing so much easier.

“Tom has been cared for at RJAH since birth and the fantastic Mr Kiely and his team have performed all his surgeries and recuperation.”

Dave Henson MBE is a British parasport athlete who has represented Britain at the Invictus Games, World and European Championships. In 2016 Dave was selected for the Summer Paralympics in Rio, winning a bronze medal in the 200m sprint (T42).