Skip to content
Home>Is it love or is it Sepsis?

Is it love or is it Sepsis?

Roses are red, Violets are blue, if you’re unsure about Sepsis, we’ll give you a clue! 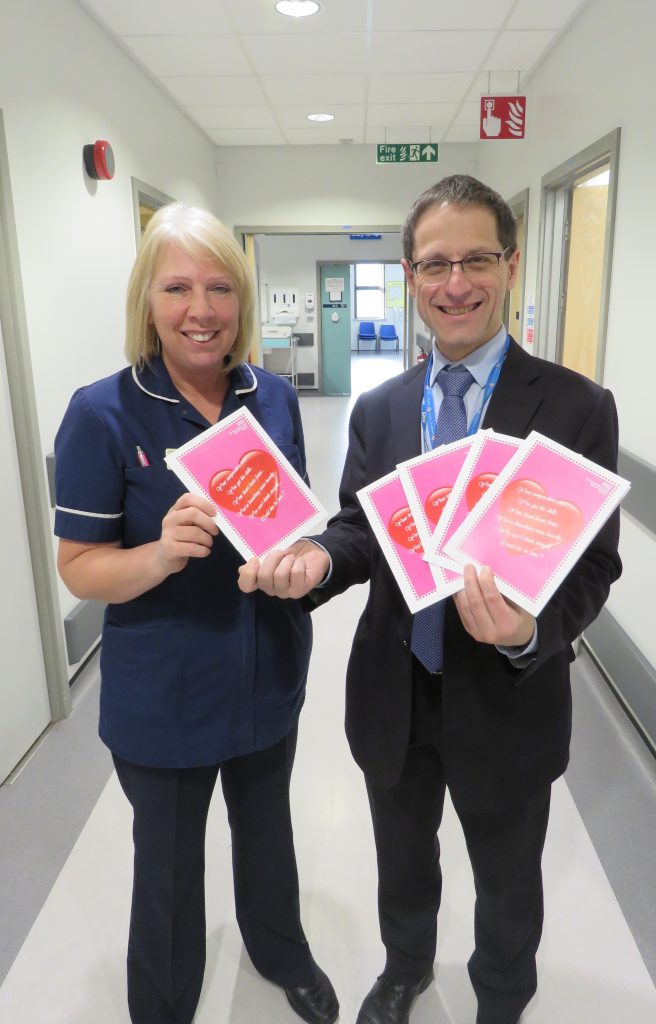 Sister Sharon Hollister, from Ward 17 at the Princess Royal Hospital in Telford, is presented with one of the cards by Dr Edwin Borman, Medical Director.

It is a fun way of talking

The Shrewsbury and Telford Hospital NHS Trust (SaTH), that runs the Royal Shrewsbury Hospital (RSH) and the Princess Royal Hospital (PRH) in Telford, is working to improve treatment for patients with Sepsis using techniques it is developing as part of its work with the Virginia Mason Institute in Seattle.

All of this work is being brought together with a new information page on SaTH’s website (www.sath.nhs.uk/your-health/sepsis).

Dr Edwin Borman, Medical Director at SaTH and Executive Sponsor for the work the Trust is doing on Sepsis, has chosen Valentine’s Day to help highlight the symptoms of Sepsis and the importance of staff looking out for them.

Edwin said: “When you look at some of the symptoms of Sepsis, they are remarkably similar to some of the things we associate with being in love, so we thought using Valentine’s Day would be a good way of helping to spread the message of what to look out for.

“We have produced some posters which have been put up around the Trust and I shall be sending a special ‘Valentine’s Card’ to all Wards asking them to think about Sepsis and the signs of Sepsis.”

Sepsis arises when the body’s response to an infection injures its own tissues and organs. It can lead to shock, multiple organ failure and death, especially if not recognised early and treated promptly.

Symptoms of Sepsis include:

“Sadly, in our hospitals, around six patients a month die from Sepsis, along with other cases where the patient does not reach us in time. We want to reduce that number by at least half and believe that we can do so by increasing awareness of the condition and improving treatment.

“The work we have already done on our Acute Medical Unit, Surgical Assessment Unit and on Ward 28 have shown that we can achieve better outcomes for our patients. Now we want to make sure everyone, throughout our Trust, thinks about Sepsis and acts on it.”