These early signs and symptoms can lead to septic shock.

Here at the Shrewsbury and Telford Hospital NHS Trust (SaTH), we have been working to improve care for patients who suffer Sepsis by using techniques learnt from the Virginia Mason Institute (VMI) in Seattle, as part of a five-year partnership.

Sepsis arises when the body’s response to an infection injures its own tissues and organs. It leads to shock, multiple organ failure and death, especially if not recognised early and treated promptly. There are around 150,000 cases of Sepsis in the UK every year and approximately 44,000 deaths.

Sadly, at least four patients at SaTH die each month from Sepsis. Early recognition and screening for Sepsis is vital to ensure timely and effective treatment.

Dr Edwin Borman, Director of Clinical Effectiveness at SATH, said: “Although Sepsis is relatively uncommon, it can prove fatal and patients who develop the condition can deteriorate very, very quickly.”

RPIW Improvements have been undertaken on 2 wards within the Trust –

100% of patients receiving all appropriate elements of the sepsis bundle within one hour.

In April 2016, we held a Rapid Process Improvement Week (RPIW) for the treatment of Sepsis. By focusing on improving the way patients presenting with Sepsis are screened, we aimed to show a significant reduction in lead times, waste and quality defects.

During RPIW we held several events, including 110 members of staff at SATH attending a discussion highlighting what is known as the “Sepsis Six” – a series of measures which should be delivered within one hour of a diagnosis of Sepsis. These measures include delivering oxygen and administering antibiotics.

As well as the “Sepsis Six” briefing, staff were also given the opportunity to brainstorm and gather ideas as to how they can improve testing and intervention at a practical level. Amongst other ideas, the following were implemented with great success;

Members of the Surgical Assessment Unit with a Sepsis trolley

The trolley focuses on the bundle of treatment a patient who has Sepsis will need. Through

keeping a ready-stocked trolley on a ward, treatment can be accessed easily and quickly at all times.

“By taking a blood trolley and converting it into a Sepsis trolley, that not only had everything needed to deliver the bundle but also came with a folder that clearly outlined with visuals exactly where everything was kept, we stopped staff from having to walk around the ward looking for equipment and various other parts.” – Sister Andrea Walton.

The Value Stream also highlighted the need to raise staff awareness levels of Sepsis symptoms and treatment, leading to the creation of an informative leaflet. 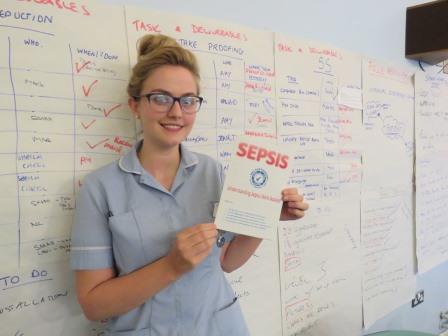 Staff Nurse Viola Jones, Process Owner of the first Sepsis Value Steam, said: “When challenged to improve screening and recognition of Sepsis we found some people didn’t have a clear understanding of what Sepsis is. To combat this we produced a simple leaflet that explains what Sepsis is that comes with an informative quiz to ensure the information learnt in the leaflet is retained.

“The leaflet has helped empower staff and make them more aware of Sepsis, which as a result improves screening and recognition of Sepsis for our patients.”

The leaflet, along with other initiatives such as introducing a user-friendly sepsis tool in the nursing documentation, means we have managed to reduce the cycle time for the completing of nursing documentation from 45 minutes to just 10 minutes (78 per cent). The cycle time for this is from the moment the patient has observations recorded to when the Sepsis screening tool is used.

Here at the Shrewsbury and Telford Hospital NHS Trust, we have managed to improve the way patients presenting with Sepsis are screened, as another milestone in the exciting five-year partnership with the Virginia Mason Institute (VMI) in Seattle is reached.