More than 2,500 men in the region have been screened for potential aneurysms over the past 12 months. 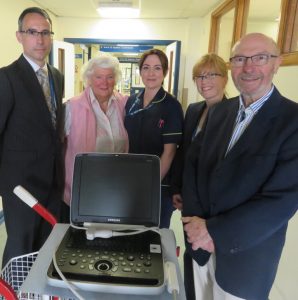 A ruptured Aorta—the main blood vessel that runs from the heart, down through the abdomen and into the body—causes more than 6,000 men to die in the UK every year. That is why all men over 65 are invited to get themselves checked out as part of the National Abdominal Aortic Aneurysm Screening Programme.

The programme aims to reduce deaths from Abdominal Aortic Aneurysms (AAA) through early detection, appropriate monitoring and treatment. Since AAA screening launched in the county on 1 April 2012 around 12,800 men have been screened.

The screening is being carried out thanks to the support of the League of Friends of the Royal Shrewsbury Hospital (RSH) which has provided £44,000 funding for two ultrasound scanners which are providing superior imaging for the screening.

Jodie Joyner, AAA Screening Programme Technician at SaTH, said: “AAA screening is offered to all men registered with a GP during the year they turn 65. Men over 65 who have not been screened can self-refer by contacting their local screening programme directly.

“The aim of screening is to detect and treat large aneurysms early in order to reduce the number of premature deaths from ruptured aneurysms.

“The screening test is a simple ultrasound scan that looks for a weakness and enlargement of the aorta, the main blood vessel in the body. The results are available straight away.

“The screening is undertaken in the community within GP practices and involves a simple ultrasound scan of the abdomen. The result is given to the patient straight away. Aneurysms are classed in three categories.

Tim Sykes, Consultant Vascular Surgeon, said: “We’re incredibly grateful to the League of Friends of RSH for supporting our AAA screening programme by funding two ultrasound scanners which are providing superior imaging for the screening.

“Their continued support is incredibly valuable and we very much appreciate this as well as the efforts of everyone who helped to raise the money which has paid for these scanners.”

Ray Smith, Executive Chairman of the League of Friends of the Royal Shrewsbury Hospital,  said: “These two vital pieces of equipment costing £44,000 will provide superior imaging, which is extremely beneficial in identifying abdominal aortic aneurysms.

“This state-of-the-art equipment has also enabled the Trust to remain within the national screening programme and for the AAA team to save more lives with early diagnosis.

“The purchase of this equipment which will benefit patients throughout Shropshire and mid Wales, would not have been possible but for the generosity of the people of the region and beyond through their generous donations and legacies.”

For more information about AAA Screening visit the website here.

Patients can contact the local AAA screening programme for Shropshire and Telford & Wrekin to self-refer or for further information by calling 01743 261048.