A new Swan Room has been created to provide dignity and privacy for patients at the end of life at the Trust that runs Shropshire’s two acute hospitals. 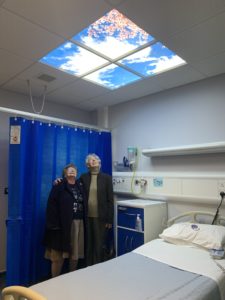 Susan Jones and Val Alcock in the new Swan Room

The latest Swan Room on Ward 32 Short Stay at the Royal Shrewsbury Hospital (RSH) was made possible by generous donations from the families of Derek Jones and Colin Alcock, who were both cared for by The Shrewsbury and Telford Hospital NHS Trust (SaTH) before their deaths.

The Swan Room builds on the work being done by SaTH, which runs RSH and the Princess Royal Hospital (PRH) in Telford, to improve end of life and bereavement care. It allow relatives to spend valuable time with their loved one, who is at end of life, in a more private, peaceful and calming environment.

Jules Lewis, End of Life Care Facilitator at SaTH, said: “Huge thanks must go to Mrs Val Alcock, Mrs Susan Jones and their families whose generous donations have made this Swan Room possible. Thanks also to the staff on Ward 32 SS and the Trust’s electricians, carpenters and decorators who have made the room so fantastic.

“The importance of Swan Rooms should not be underestimated; they allow families to spend valuable time with their loved ones at the end of life in an intimate space.”

Mrs Alcock, wife of Colin, said: “we are so pleased with what has been done with our donations. It is heartening that so many families will benefit and in such a warm and calm environment.”

SaTH now has 23 Swan Rooms at RSH and PRH.