Staff working on a specialist Ward for patients who have suffered a stroke have created the first ‘Exemplar Ward’ at Shropshire’s two acute hospitals. 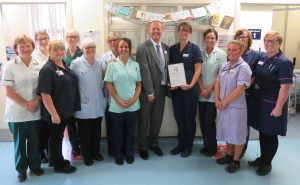 Staff on Ward 16 are presented with their Exemplar Ward certificate and badges by Simon Wright, Chief Executive

Ward 16, the Stroke Rehabilitation Ward at the Princess Royal Hospital (PRH) in Telford, received the honour from Simon Wright, Chief Executive at The Shrewsbury and Telford Hospital NHS Trust (SaTH), which runs PRH and the Royal Shrewsbury Hospital (RSH).

The Exemplar Ward initiative is a drive to build on the Trust’s vision to provide the safest and kindest care in the NHS. To achieve Exemplar Ward status, the team on a ward must meet high standards in a number of key areas including: caring, medicine management, leadership, nutrition and hydration, cleanliness, safety and record-keeping. There are three levels of award – silver, gold and diamond.

Ward 16 at PRH is the first ward at SaTH to achieve Exemplar status, receiving a gold award. Other wards are expected to follow in the near future.

Ann Allsop, Ward Manager, said: “Looking back to when I took over Ward 16, I can’t believe what an amazing journey the team has been on. We have pulled together, challenged each other and celebrated our achievements together.

“I could not be prouder of the team and so very thankful to them for all of their support.”

Tina Scott, a Sister on Ward 16, said: “My experience of Exemplar on Ward 16 Stroke Rehab has been a positive one. I feel it has been a way for the ward to build on and improve existing practices and standards of care.

“We all worked well as a team and supported each other through the changes that were made on the ward. I’m really proud to work on Ward 16 with the team we have.”

Jodie Smith, a Health Care Assistant on the Ward, added: “We are all over the moon to receive the award and very proud to be part of such a wonderful and special team.”

“It is great that we now have something like the Exemplar programme to celebrate the efforts of our teams. The people who will get the real benefit from this is our patients.”

Helen Jenkinson, Deputy Director of Nursing and Quality, who is driving the Exemplar programme, added: “The Exemplar Programme represents our visions and aspirations for the Trust and the patient experience is at its heart.”