Comms specialist to ‘run Disney’ for The Harry Johnson Trust

SaTH’s communications specialist is to ‘run Disney’ to raise funds for a charity that supports children with cancer.

Claire Dunn will be taking part in the 13.1 mile Disneyland Paris-Val d’Europe Half Marathon on September 22 for The Harry Johnson Trust – a charity close to her heart.

The Harry Johnson Trust helps and supports children and young people with cancer who are being treated by the oncology team at the Princess Royal Hospital in Telford. The Trust is run by Sally and Stephen Johnson in memory of their son Harry who died in July 2014, aged just 7, from Double Hit Non-Hodgkins Lymphoma. 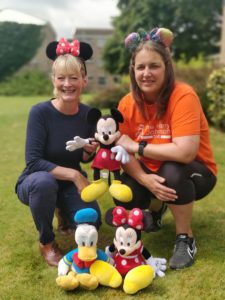 Sally and Claire, who are both running the Disney Half Marathon

Claire will be joining Sally and six other runners who are tackling the half marathon course, which snakes through two Disney parks and surrounding villages, for the Trust.

Claire, who is based at the Royal Shrewsbury Hospital, said: “Harry and my son, also called Harry, were the best of friends when they were at nursery together and their friendship led to a firm friendship between our two families.

“I really wanted to do something that would remember Harry and the incredible courage he showed, and also raise funds for a charity that does such wonderful work in our hospitals.

“So when Sally said she was doing the Disneyland Paris Half Marathon again this year I signed up – even though I hadn’t even run to the end of the road let alone 13 miles!

“I have been training since February and it has been a real journey for me. In just over four months I’ve gone from not being able to run for a minute to signing up for a 10k.

“I’m so grateful for the fantastic support I’ve had from family and friends, particularly my running buddy Claire who has put me through my paces rain or shine, and even a storm, to get me to believe in myself.

“I’ve got a few weeks of training left to go as I up my distance even more – so my Comms colleagues at SaTH will have to continue to put up with regular updates about my aches and pains!

“I really can’t wait to get to Paris now, pull on my trainers and give it my all for Harry, and for all the children and their families who benefit from the fantastic support of The Harry Johnson Trust.”

If you would like to support Claire’s run for The Harry Johnson Trust, please follow the link here: https://www.givey.com/disneyhalfforharry