Sporting stars from the county’s football teams have delivered some Christmas cheer to youngsters on the Children’s Ward at the Princess Royal Hospital (PRH) in Telford. 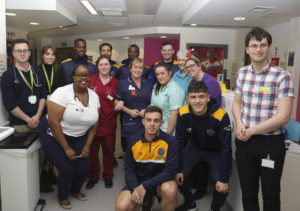 Footballers from Shrewsbury Town Football Club and AFC Telford United visited the youngsters in hospital, armed with gifts. They also chatted with the young patients and staff and had their photographs taken during their annual visits.

Jennie Probert, Children’s Ward manager at The Shrewsbury and Telford Hospital NHS Trust (SaTH) which runs PRH, said: “We would like to thank everyone for their incredibly kind donations to the Children’s Ward this Christmas. 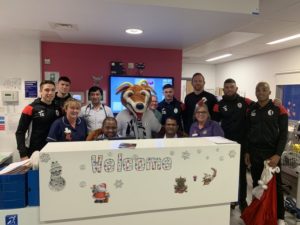 “They will help to bring cheer to all those children, and their families, who are in hospital over the Christmas and New Year period.”

The Telford Tigers ice hockey team also visited the children to hand out teddies gathered at their annual teddy-toss – something that they have done for the last four years.

The Tigers encouraged their fans to throw teddy bears onto the ice after they scored their first goal in their home games against Widnes Wild and Peterborough Phantoms earlier this month. 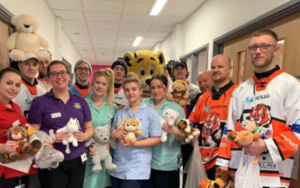 Georgia Newsome, from the Play Team at SaTH, said: “On behalf of everyone, I would like to say a big thank you to the Telford Tigers and all the local companies who have donated gifts this year.”