A patient who feared he would never walk again after contracting COVID-19 has sent a heartfelt message of thanks to staff at the Royal Shrewsbury Hospital (RSH) – and showed off his dance moves into the bargain. 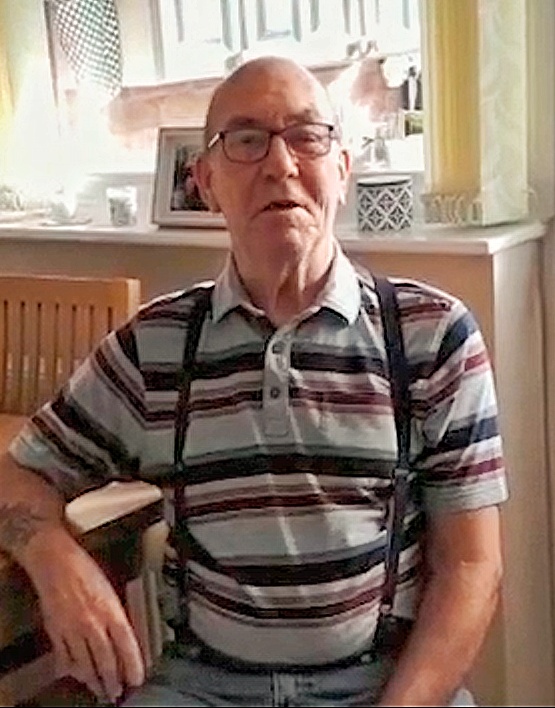 Mick Hazeldene, 65, was transferred to RSH after initially being treated at Royal Stoke University Hospital.

After six weeks of care Mick was finally able to go home, and has sent a video thanking the teams in Stoke and Shrewsbury, along with footage of him dancing in his kitchen to the song Do I Love You (Indeed I do) by Frank Wilson.

Both Mick and his wife, Karen, tested positive for COVID-19 on the same day but, while Karen’s condition improved, Mick deteriorated to the point where he needed to be taken to the critical care unit in Stoke and placed on a ventilator.

After three weeks, as the number of COVID-19 cases rose across the country, Mick was transferred to RSH, where he spent another three weeks – two of those on a ventilator on the High Dependency Unit (HDU).

Mick said: “I cannot recall my time spent in Critical Care or HDU and it was only when I moved Ward 32 at RSH that I became aware of what was going on around me. I was so grateful to be alive, but also scared at how I looked and felt physically.

“I was eventually moved to Ward 27, where I was able to converse with other patients and felt more comfortable as I was coming back to reality.

“All the staff were brilliant as they had so much to do but would still give you time if you required their attention. At 65 years of age and it being the first time in my life that I’d had to spend time in hospital, I got embarrassed when it came to using items like a bedpan or commode as I could not walk to the toilets, but there was no need as the nurses and care staff just took it in their stride, making me feel at ease.

“Once I was declared medically fit, the Therapy team then took charge of my rehabilitation. I’d lost 2.5 stone in weight and my muscles were so deconditioned, I could not sit upright on my own and the first time the team got me out of bed, I could not support my own weight and crumpled to the floor. Mentally, this put me at my lowest point as I thought that I would never walk again.

“The team kept my spirits up and came to see me daily, encouraging and motivating me, without pressure, to take a few steps at a time to get me walking again.

“On my discharge day, two days before Christmas, I was overwhelmed by the guard of honour and good wishes from the whole team on Ward 27, some of whom I had not met. Their words of encouragement were touching and will stay with me as I continue to battle this virus and try to get back as much normality as possible.

“Since getting home we have exercised daily and, as my confidence grew, the idea of a dad dance video to an appropriate song, much to the despair of both my sons, came to mind as a way of thanking all and showing that I had taken on board the importance of continuing with the Therapy team’s hard work and advice.

“From the moment I was admitted to both the RSUH and Royal Shrewsbury, all who were involved with my care, not only looked after my needs and welfare excellently, but were very thoughtful as to the concern for Karen and our sons on how they were coping and kept them up-to-date with events and were kind and considerate when answering any of their questions no matter how busy they were. They even made it easy for us to communicate via video link, zoom/teams, which was comforting as I was so far from home and no visiting was allowed.

“Hopefully in time my memories of the bad things that happened will go but I don’t think I will ever forget the professionalism and dedication of all the NHS staff.”

Clare Newby, Ward Manager, said: “I remember Mick well and am touched that he has taken the time to tell his story. The whole team really came together to aid his recovery with a shared goal of going home for Christmas.

“The team will be delighted by his message.”