DJ Chris Evans has donated £6,000 to the Children’s Ward at SaTH during a charity cash giveaway live on air.

The star gave out £250,000 to charities and nominees from The Sun’s Who Cares Wins health awards during his Virgin Radio Breakfast Show – which included porters Nick Evans and Ruth Lowe from the Princess Royal Hospital (PRH) in Telford. 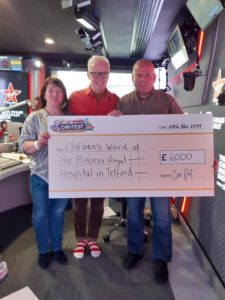 Nick and Ruth were crowned the winners of The Sun’s Ultimate Lifesaver award – and were invited to be part of the radio show. They were live in the studio this week alongside celebrity guests James Martin, Beverly Knight and Sharleen Spiteri when they were presented with the cheque.

Nick said: “Ruth and I were sat with Chris Evans when we attended The Sun Who Cares Wins Awards. He invited us into the studio to see him and it really was an incredible experience and one that we both won’t forget.

“To also receive a cheque for £6,000 for our Children’s Ward was fantastic – the icing on the cake of this whole unbelievable experience. We can’t thank Chris enough.”

Nick and Ruth won the Ultimate Lifesaver award for helping to save the life of seven-week-old Logan Clifford.

Nick, 48, and Ruth, 47, sprang into action after Logan stopped breathing when his parents, Sarah and Mike were visiting a relative at the PRH.

Sarah’s screams alerted Ruth, who shouted for Nick. He grabbed Logan and performed CPR as he ran down the corridor to A&E. Nick continued CPR until the resuscitation team at PRH took over – and the porters stayed by Logan’s parents’ side until they knew he was going to be OK.

Jennie Probert, Children’s Ward Manager at SaTH, said: “This is wonderful news for the Children’s Ward and we are so grateful to Chris for this fantastic donation. What Nick and Ruth did was amazing – they are true heroes – and we would like to thank them too.”

Chris Evans is a supporter of The Sun’s health awards, and was so touched by the incredible stories at this year’s event, he has decided to give away some of the profits from his CarFest events to those honoured – and the worthy causes they represent.

Nick was also the winner of SaTH’s VIP (Values in Practice) Award this year for Patient Experience.