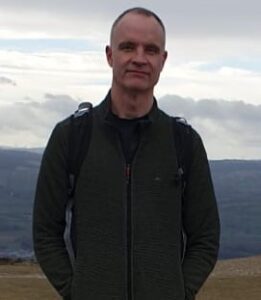 A doctor has praised leisure centre staff for using a defibrillator to save the life of a swimmer.

Father-of-two Ben Phillips, pictured, suffered a cardiac arrest when he was swimming underwater at Oswestry Leisure Centre pool and blacked out.

His girlfriend alerted leisure centre staff who pulled Ben from the pool. He was resuscitated by the side of the pool after staff administered CPR and the defibrillator – an electronic device that applies an electric shock to restore the rhythm of your heart.

When he arrived at Royal Shrewsbury Hospital, 48-year-old Ben was fully conscious and alert. He stayed at the hospital for observation and extra oxygen.

Chris Mowatt, Clinical Director for Critical Care, said: “It is quite amazing – it is testament to the poolside resuscitation skills of the leisure centre team.

“Getting defibrillators out into the community is really important. If Ben had just had CPR and was waiting for an ambulance the outcome is likely to have been very different – the fact that they gave him a shock immediately is life and brain saving.”

Ben said: “I am eternally grateful that the lifeguards were there and reacted so calmly and swiftly in that situation. I am grateful that as a father of two young children I am still here and it is thanks to them and the fact that there was a defibrillator at the pool.”

The defibrillator was brought to the pool by Phil and other members of staff Chloe Williams, Cooper Lock and Lauren Humphreys had helped at the scene and with calling the emergency services.

Ben who is an actor, director and teacher was later transferred from RSH to his hometown of Liverpool for further tests. He was due to start a tour with his one-man show called ‘The Long Way Home’, but it has now been postponed until the Autumn.