More than 80 people have signed up to be Engagement Champions at Shropshire’s two acute hospitals, in a new role introduced as a result of NHS Staff Survey feedback. 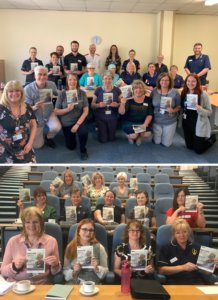 The Engagement Champions will have the opportunity to make a positive difference to everyone at The Shrewsbury and Telford Hospital NHS Trust (SaTH) and improve how it feels for people to work at the organisation.

Champions will act as a conduit for colleagues, relaying back ideas, suggestions or feedback to management and other senior leaders, while being a trusted voice that helps to provide insight into climate, morale and engagement along with further areas to develop or review.

Julia Clarke, Director of Corporate Governance at SaTH, which run the Princess Royal Hospital (PRH) in Telford and the Royal Shrewsbury Hospital (RSH), said: “Having an engaged workforce is critical to SaTH becoming a better organisation, and in the most recent NHS Staff Survey it became apparent the Trust was not putting enough emphasis on this.

“To hear criticism about SaTH and its leadership is never easy, especially when, like me, you have devoted your career to this organisation, but I, and every member of the Board and our Senior Leadership Team are ready to listen and to act.

“Within weeks of the results being published we created an Engagement and Enablement Group with representatives invited from all walks of our hospitals. I will always remember the buzz and enthusiasm in that very first meeting. The appetite to make SaTH great was clear to see and people were thrilled to have their voices heard.

“The Engagement Champion role was one of the first things suggested at that meeting. It has the support of everyone involved as we strongly believe it will make a huge difference to the way we engage with our colleagues.

“Anyone can be an Engagement Champion. We have just over 80 at the moment but come the end of the year nothing would please me more than to have hundreds of people in the role.”

The role is voluntary and Engagement Champions are asked to host a tea and cake drop-in session for their colleagues every two months, attend regular executive meetings, and have conversations with a broad range of colleagues. They will also be provided with printed copies of staff newsletters so they can be distributed to colleague who do not have access to the intranet or email.

The key responsibilities of Engagement Champions is to champion the voice of front-line staff of the service they represent and to share staff feedback from that service. They will share learnings and best practice, while encouraging and empowering colleagues to make improvements to their services.

Kelly Mcconville, Cleanliness Manager at SaTH, has signed up to become an Engagement Champion, saying she signed up to the role “without a moment’s hesitation”.

She said: “I come into contact with a lot of people in my line of work, many of whom do not have access to email. I want to represent the people I work with and help spread the non-clinical voice while hopefully making a positive impact on my colleagues working lives.”

He said: “I see a lot of staff through my job and frequently hear how frustrated they feel about being out of the loop, or frustrated that they are unable to staff briefings as they can’t leave their departments.

“Having this role, which creates a staff can link, will enable people to better raise concerns, queries or work that deserves recognition to the attention of senior staff.”

Hilary Morton, Moving and Handling Advisor, at SaTH, has also joined, saying: “This is a really important new role as staff really need to know what’s going at the Trust.”