A couple have raised more than £1,200 for the Neonatal Unit at the Princess Royal Hospital (PRH) as a thank you for the ‘amazing care’ given to their eight-month-old son.

Morty Hill spent nearly ten weeks in the unit, based in the Shropshire Women & Children’s Centre at PRH in Telford, after he was born 10 weeks early, weighing 4lb 3ozs, on 27 December last year. 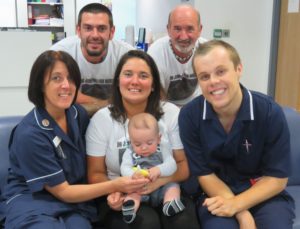 Edward, Shane, Stacey and Morty with Shirley Teece and Tim Manuel from Neonatal

He was finally allowed to go home with his parents Stacey and Edward Hill on March 3 this year –  two days before his official due date on March 5 – after he was discharged following a trip to Alder Hey Children’s Hospital for hernia surgery.

The couple, who live near Shrewsbury, took part in a sponsored 160ft bungee jump in Tamworth – along with Morty’s grandad Shane Weeks-Pearson, 60, who lives in Broseley. They raised a total of £1,292.61 which they have presented to staff at the neonatal unit.

Stacey said: “The care Morty had was amazing and that is why we wanted to raise money to give something back to the staff. We just wanted to say thank you to them for everything they did for us, and we decided to do a bungee jump.”

Sam Davies, Neonatal Ward Manager at SaTH, said: “We are so grateful to Stacey, Edward and Shane for their very kind donation, which we will use to help benefit other patients and their families.”