A family has made a kind donation to a new Doctors’ Mess at the Princess Royal Hospital (PRH) in Telford as a thank you for the care given to their children following an horrific quad bike accident. 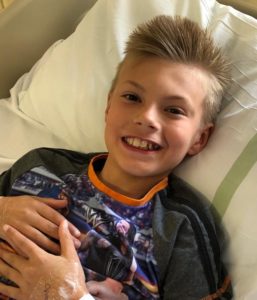 Rob and Burnadette McYoung, who own Door Loading Services UK Ltd in Telford, have donated roller shutters to the new Mess as a thank you for the care given to their son Jay’D, 11, and daughter Kendra, 8, at the PRH after the accident in 2014, which left Jay’D fighting for his life.

The new Doctors’ Mess, which was being officially opened today (9 May), replaces an outdated facility based in a bungalow outside the main hospital building.

Burnadette, whose company in Hadley specialises in industrial door manufacture, servicing and repairs, said: “We can only thank the NHS and the staff at PRH for their hard work, dedication, commitment and long hours they put in to help their patients.

“We were informed that he had probably sustained brain damage and there was also a chance of him losing his eye. We did not know whether he would survive the first hour, let alone the first 24 hours and what the outcome would be. 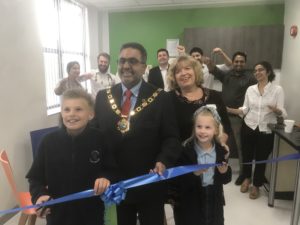 “This was the most terrifying and heart breaking time of our life. All the staff at PRH were amazing and did everything possible to control Jay’D’s injuries, and to keep us informed and as calm as possible.”

Jay’D was transferred to Birmingham Children’s Hospital for further treatment and surgery and is currently still under their care, together with the care of University Dental Hospital of Manchester.

Burnadette said: “Since the accident both Jay’D and Kendra still attend PRH on regular occasions. Jay’D will start secondary school in September and Kendra will start Year 4. They are now both thriving at school and both love their outdoor activities.”

Another kind donation has been made by CLC Group Ltd, Telford – a property maintenance and refurbishment company – which has provided a television for the Mess. It was delivered to the PRH in a gold van today.

Nigel Chapman, for CLC, said: “We have been delighted to have been involved in such a worthwhile project giving junior doctors the accommodation they thoroughly deserve.”

Dr Jenni Rowlands, Director for Postgraduate Education at The Shrewsbury and Telford Hospital NHS Trust (SaTH) which runs PRH, said: “We are incredibly grateful to all those who have worked so hard to make this a reality.

“We would also like to thank Rob and Burnadette McYoung who have kindly donated roller shutters as part of this project and CLC Group for their kind donation of a television.

“We really do value our doctors – and all of our staff – and we know that this welcoming and dedicated area will make such a difference to their working lives.”

The new Mess is in addition to the ongoing refurbishment of six doctors’ houses at the PRH which will each accommodate four doctors and will be provided for free to Foundation Year 1 doctors and other specialities which are hard to recruit to.

The housing project, which is being spearheaded by Telford & Wrekin Council, has seen the support of the community who responded to a DIY SOS-style appeal for help.