A family has praised a quick-thinking porter at the Princess Royal Hospital (PRH) in Telford who performed emergency CPR on their seven-week-old son when he unexpectedly stopped breathing.

Sarah and Mike Clifford, of Telford, said if it hadn’t been for the actions of Chargehand Porter, Nick Evans, their baby son Logan wouldn’t be here today. 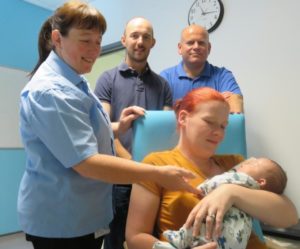 The family with Ruth (L) and Nick (R)

The couple were on their way to visit Mike’s granddad in PRH last Friday (5 July) when Sarah realised that Logan had stopped breathing as they walked through the main entrance of the hospital.

Ruth Lowe, a General Porter who was nearby, heard Sarah’s shouts for help and raced to find Nick who, as a trained first-aider, knew how to perform CPR. He instantly recognised that Logan was not breathing and was able to perform chest compressions until SaTH’s specialist team took over.

Sarah said: “We were there to visit Mike’s granddad and as we walked through the main entrance, Logan stopped breathing. I screamed for help and Ruth was there, who went and got the amazing Nick who performed CPR on Logan.

“He was born prematurely and has chronic lung disease, but up until that moment he had had no problems. Within seconds that all changed. It was terrifying.”

Nick, who has worked at The Shrewsbury and Telford Hospital NHS Trust (SaTH) which runs PRH for the last 30 years, said: “I was in my office when I heard Ruth shouting ‘Nick I need help’. I just grabbed Logan off Sarah, checked for a pulse and realised he hadn’t got one and he was turning blue. I ran into A&E performing CPR and shouting for help.”

On arrival in A&E, a specialist paediatric team took over from Nick to help Logan.

Nick added: “Even though I started the ball rolling, the credit has got to go to the whole Trust for helping Logan. I also want to recognise the Trust’s resuscitation team for their fantastic training.”

After Logan was treated in A&E, he spent five days on Ward 19 (Children’s Ward) at PRH before Sarah and Mike were able to take him home from the hospital yesterday (9 July). 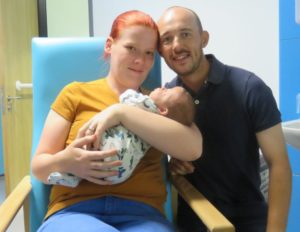 Sarah and Mike with baby Logan

Sarah said: “There are not enough words to say how grateful we are. Without Ruth and Nick’s quick thinking we wouldn’t have our baby son here today; it would have been a completely different story.

“I would also like to thank the staff in A&E and on the Children’s Ward, the care in the hospital has been amazing.”

Nick visited Logan on the ward every day, along with Ruth, to make sure that he was recovering well.

Ian Morris-Jones, Logistics Manager at SaTH, said: “We are immensely proud of Nick and Ruth whose quick thinking actions that day helped a family in their hour of need. We are absolutely delighted to hear that Logan is doing well and is now home, and we wish them all the best.”