A fund set up to benefit patients who are receiving end of life care, and their families, has raised nearly £60,000 since its launch six years ago.

The Swan Fund was set up by Jules Lewis, End of Life Care Facilitator SaTH, which runs the Royal Shrewsbury Hospital (RSH) and Princess Royal Hospital (PRH) in Telford. 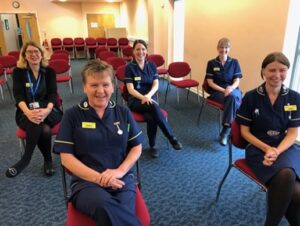 The generous donations have come from individuals, families, and organisations and they have helped to fund many improvements – including new Swan Rooms across both hospital sites which provide privacy and dignity for patients who at the end of their life, and their families.

Most recently, the Swan Fund helped to purchase a skylight on ITU at PRH, and soothing mood lights for all wards. The Swan Fund also funds a Wedding Box which allows staff to plan a hospital wedding for a patient, decorate their room and toast the bride and groom; and there have been two weddings in the last 12 months.

Jules said: “Since 10 July 2015 when I set the Swan Fund up, the fund has raised nearly £60,000. Considering the last 14 months, it is hard to believe that we have managed to raise on average £10,000 a year and we are so grateful to everyone who has donated.

“We have seen a drop in donations over the last 12 months, so this is an incredible amount and I am very proud of all that the End of Life Care team has achieved thanks to such amazing support.”

The fund is also supported by The League of Friends of the RSH and the Friends of PRH through Swan Memory Boxes, which can be used by relatives and loved ones to keep special items.