Staff at the Trust that runs Shropshire’s acute hospitals have been donating Christmas gifts for victims of domestic abuse. 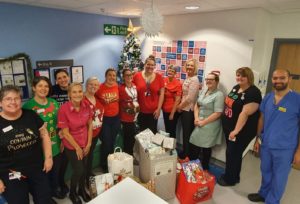 Postnatal Ward with their donations

The team on the Postnatal Ward at the Princess Royal Hospital (PRH) in Telford decided they wanted to do something to help women who are experiencing a difficult time over the festive period.

Annette Barton, Postnatal Ward Manager at SaTH, which runs PRH and the Royal Shrewsbury Hospital (RSH), said: “The team decided they wanted to do something to support a local charity with direct links to women who use our services.

“Staff brought in all kinds of gifts which were labelled to make sure they went to the most appropriate person, these were wrapped before handing them over to the charity. All sorts of gifts were donated, including toiletries, toys and books.

“A patient also donated a large quantity of formula milk that she didn’t need – all in date and sealed – and an unused breast pump.”

“The supporter from the charity, who came to collect the gifts, said it was one of the largest donations they have received and thanked us all for our contributions, which was lovely.” 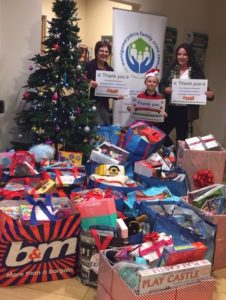 Sarah Voice and her son with their donations

Sarah said: “I have collected items for the Montgomery Family Crisis Centre for four years. It started as a personal donation and has now grown into an annual Christmas collection.

“This year, due to the generosity of RSH and PRH staff along with collection points closer to home in Welshpool, my son and I were able to drop off around 600 donated items for families in need this Christmas.

“I just wanted to say thank you to every single person that donated items and supported the collection this year, I was overwhelmed by the generosity shown by people wanting to help.”