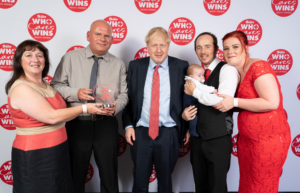 Prime Minister Boris Johnson presented the award to quick-thinking Nick Evans and Ruth Lowe for helping to save the life of a seven-week-old baby boy.

His parents, Sarah and Mike were visiting a relative at the Princess Royal Hospital (PRH) in Telford, when they noticed Logan’s lips had turned blue.

Sarah’s screams alerted Ruth, who shouted for Nick. He grabbed Logan and performed CPR as he ran down the corridor to A&E.

Nick continued CPR until the resuscitation team at PRH took over – and the porters stayed by Logan’s parents’ side until they knew he was going to be OK.

Nick said: “We are completely thrilled, delighted and humbled to win the Ultimate Lifesaver award from The Sun.

“I’d like to think we did what anyone would have done in that situation. Our evening at the awards ceremony is something neither of us will ever forget, but the most important thing is Logan is now a happy and healthy baby boy and it was lovely catching up with the Clifford family once again.

“I would also like to add, that although it was Ruth and I that started the ball rolling, a huge amount of credit has got to go to the whole Trust for helping Logan. I also want to recognise SaTH’s resuscitation team for their fantastic training.” 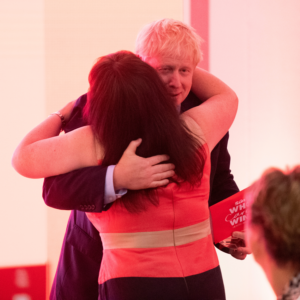 The Prime Minster gets a hug from SaTH porter Ruth.
Credit: Paul Edwards – The Sun

Mum Sarah, 30, has called the two porters at SaTH, which runs PRH and The Royal Shrewsbury Hospital (RSH), “my heroes”.

She added: “There are not enough words to say how grateful we are. Without Ruth and Nick’s quick thinking we wouldn’t have our baby son here today; it would have been a completely different story.”

As he handed the pair the Ultimate Lifesaver trophy, PM Boris Johnson said: “The NHS is revered around the world, and in no small part due to the heroes working in it every day.”

He added: “My experience of the NHS is like everybody else in the NHS – one of admiration and love.

“It is the most extraordinary institution in the world. If our country was an omelette then the NHS is the egg white that holds the great British cake together.”

Throughout the awards ceremony, celebrities and politicians were moved to tears as the everyday heroes of the NHS were honoured. 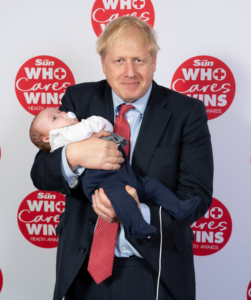 The Sun’s Who Cares Wins awards is a chance to give recognition to the selfless medics, researchers, and volunteers who’ve made a difference to people’s lives.

Present at the award was NHS chief executive Simon Stevens, who opened the event by saying: “Now in its third year, the awards have quickly become one of the highlights of our annual calendar.

“These quiet miracle-workers are all that is best about Britain – they truly make us proud of our NHS and everything it represents.

“On behalf of the whole NHS I would like to say thanks to them, and to The Sun, for the chance to recognise their brilliance.”