Staff at SaTH have created more than 18,000 single use visors to be used by frontline colleagues looking after patients being treated for COVID-19.

The Maxillofacial and Orthodontic Laboratory team, and redeployed staff from the Trust’s Audiology department, used their knowledge, skills and equipment to develop the visors which were in much demand. 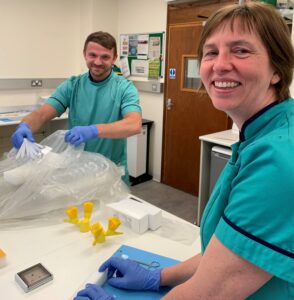 In two weeks, their idea was developed and honed, before being approved for use – and in the last three weeks they have made thousands of visors for colleagues working at the Royal Shrewsbury Hospital and the Princess Royal Hospital in Telford, both of which are run by SaTH.

The visors have been created using medical grade foam, acetate sheet and elastic.

Samantha Bunn, Principal Maxillofacial Prosthetist and Laboratory Manager at SaTH, said: “I was about to leave work when I thought there must be something that we could do to help. I thought we have skills that no one else has and it would be a shame not to use them as a team. 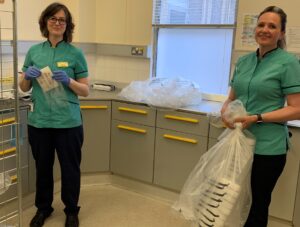 “So I contacted Paul Adams, from our Procurement department, to ask if there was anything that they needed that we could help provide. He said that the Trust was having trouble getting visors at that time, so myself and a colleague started to put together different ideas while the rest of the team worked from home. Initially, we 3D printed visors however, the demand was too high for the numbers that we could produce with this technique.

“We developed a single use visor which then had to go through an approval process, it took around two weeks before the team were back in and trained to produce the visors. It means that as a Trust, we shouldn’t run out now.”

Dr Arne Rose, Medical Director at SaTH, said: “We are seeing some fantastic innovation from our staff in many areas of our hospitals – and this is a brilliant example.

“Sam and her team have done an incredible job in producing thousands of visors which means that, along with the donations we have had from businesses and the national supply chain, we are fully stocked.”

The team is now working on developing oxygen inlets for ventilators. The prototype inlets – which have been created on a 3D printer that was donated by the League of Friends of the Royal Shrewsbury Hospital last year – are now awaiting final approval for use.