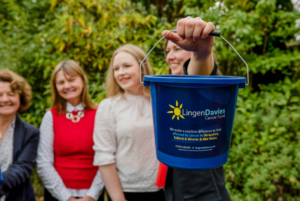 The target has been reached three weeks ahead of the anniversary date of June 5 thanks to the exceptional support of local people, organisations and businesses.

Hundreds of people have supported the appeal, and the final boost was given by funds raised at two local events; the Sponsored Ruby Walk at Lake Vyrnwy, organised by the Lewis-Jones family, and the Scott & Newman Ltd Centenary Celebration event at Ludlow Racecourse.

Funds raised for the appeal will be used to support projects promoting cancer prevention and early diagnosis, excellent treatment delivered locally, and living well with and beyond cancer. These include diagnostic equipment, wellbeing programmes, and the first ever Lingen Davies Oncology Nurse Specialists, who support patients throughout their treatment.

Chair of Trustee Mandy Thorn MBE said: “I am extremely grateful to everyone who has supported this appeal. We had a very challenging target and once again our amazing community has pulled together and helped us get there.

“The funds raised by the incredible people of Shropshire, Telford & Wrekin, and Mid Wales will make a huge difference to people living with cancer here in our community.”

Lingen Davies was founded in 1979 by former Mayor of Shrewsbury Bernard Lingen and accountant Frank Davies, with the initial aim of raising funds to establish a radiotherapy service in Shropshire for the first time. Since then, the charity has continued to raise funds to support local cancer services.

Lingen Davies CEO Naomi Atkin added: “Even though we have hit our target, we are not stopping now. We have recently agreed to fund two Endobronchial Ultrasound Scopes; tools to support diagnosis of lung cancers, and funds raised now will go towards this project. Lung Cancer is the third most common cancer in the UK, and around 350 people are diagnosed with it in our region each year.”