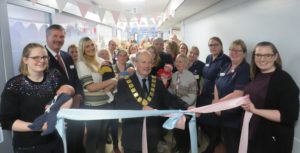 The Mayor of Shrewsbury, Peter Nutting, was joined by some of the mums, their families and the staff who helped re-design the unit, to cut the ribbon and officially open the £500,000 refurbished Midwife Led Unit.

The Mayor of Shrewsbury, Peter Nutting, was joined by some of the mums, their families and the staff who helped re-design the unit, to cut the ribbon and officially open the £500,000 revamped MLU.

Services at the MLU, which is based in the Copthorne Building at the Royal Shrewsbury Hospital, had to be relocated to another part of the building back in February after heavy winter snowfall caused damage to the roof.

As well as repairs to the roof, The Shrewsbury and Telford Hospital NHS Trust (SaTH), which runs the MLU, used the relocation as an opportunity to upgrade the unit to improve services and the environment for mothers.

The refurbishment has included the replacement of the roof, improvements to facilities such as natural lighting in its birthing rooms and the addition of a birthing couch in one of the rooms, to create a more ‘home-from-home’ setting for mothers to give birth in; as well as improved facilities for partners.

Families and staff also shared their ideas through the local Maternity Voices Partnership, and they have helped to select the colour schemes, name the birthing rooms (such as Dingle and Darwin) and choose the murals that will go on the walls. 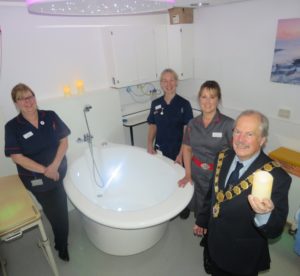 Mayor of Shrewsbury Peter Nutting is given a tour around the new-look MLU, including the fabulous new birthing pool room.

Sarah Jamieson, Head of Midwifery at SaTH, said: “We are absolutely delighted with the results of the refurbishment. We want to be able to give all the mums using our services the best possible experience and we believe that the improvements that we have made will make a real difference.

“We would like to thank all our mums and staff who took the trouble to share their thoughts and ideas on the refurbishment thorough the Maternity Voices Partnership, and also our colleagues in the Local Maternity System who have helped us implement these much needed improvements. It was important to us to make sure that the people who use it, and who work there, played a big part in designing it.”

Trust Chair Ben Reid said: “It was lovely to see some of the mums and their babies who have already been born in this new unit with us for the official opening and I would also like to say a big thank you to Peter Nutting, Mayor of Shrewsbury, for officially opening the refurbished unit.”