A Mid Wales-based business has donated almost £60,000 to NHS Charities Together, just days after it was announced that the Charity had allocated a further £143,000 to The Shrewsbury and Telford Hospital NHS Trust (SaTH) for Covid-19 recovery projects. 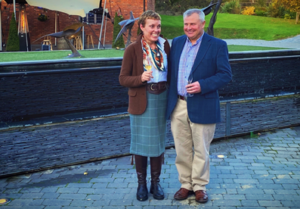 Bettws Hall Sporting Estates successfully raised £59,185 for the charity that was also wonderfully supported by Captain Sir Tom Moore and his walk for the NHS, through a raffle to win a day’s shooting at the prestigious Vaynor Park in Powys.

The family-run business launched the ambitious fundraiser in April with the target of £50,000, but after 186 days of campaigning they smashed their target.

Gwyn Evans, Managing Director of Bettws Hall, said: “We were clapping for our carers one Thursday evening and could see our community spirit was strong.

“We thought that there must be something more we can do for our heroes on the frontline, so we decided to donate a day at one of our six estates for a full team. We did not ever imagine exceeding £50,000 when we first conjured up the idea back in April.” 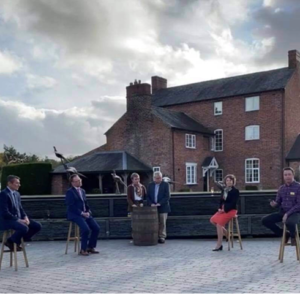 The fundraiser came to an end on Friday 23 October when the draw was made for the winning ticket at 4pm by Amazon’s Alexa, two hours prior to the Welsh lockdown. In attendance were Russell George AM, Cllr Gareth Pugh, Rosemary Harris (Head of Powys County Council) and Richard Jones (Head of Internal Communications at SaTH). All guests gave a brief speach, with Richard telling those present how NHS Charities Together funding has already benefitted staff and patients at SaTH.

SaTH’s End of Life Care Facilitator Jules Lewis also spoke via a video link to explain how her team has benefitted from NHS Charities Together funding, enabling them to launch an Emotional Wellbeing Support Programme for colleagues.

Jules said: “The money you have raised is making such a difference as it really helps support our staff so they can support our patients. Thank you so much, it means the world to us.” 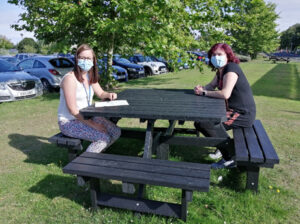 Poppy Horrocks and Lindsey Offerman using one of the new picnic benches funded by NHS Charities Together.

Julia Clarke, Director of Corporate Services and the SaTH Charity lead, added: “I would like to add my thanks to the team at Bettws Hall, as well as all their clients and supporters for supporting the NHS and fundraising for NHS Charities Together. As a Trust we get allocated money from NHS Charites Together and this has already been used to fund some really great projects, making a massive difference to staff wellbeing which indirectly has a positive impact on our patients.”

Examples of where NHS Charities Together money has been spent at SaTH includes: greenspaces at our hospitals (including the recent delivery of 34 more picnic benches to compliment those already in place), a selection of two-way radios for theatre staff to communicate while wearing PPE, the development of our Hamar Centre Counselling Service, water fountains and dementia-friendly sensory trolleys.