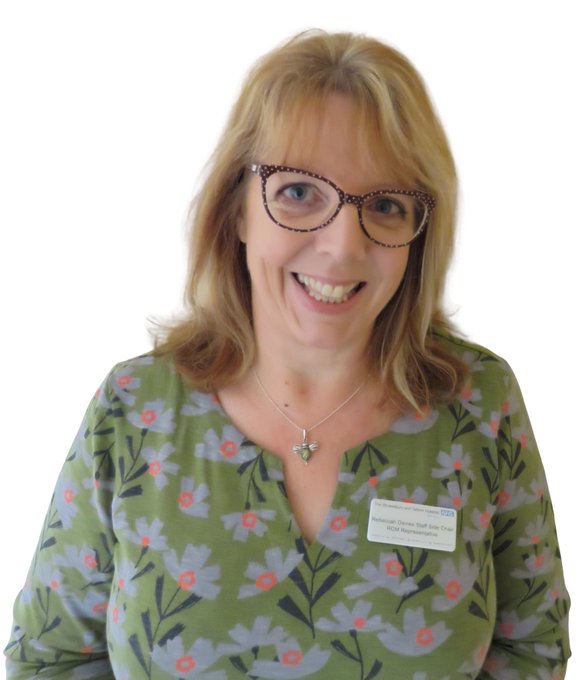 A Midwife at The Shrewsbury and Telford Hospital NHS Trust(SaTH) has won a national award for her work in helping colleagues to support each other.

The awards were held virtually because of restrictions put in place in response to the coronavirus pandemic.

Rebeccah said: “It was an overwhelming feeling of gratitude, winning the award amongst such tough competition.

“It has not been without its hard work and effort, not only from me but from the recently reformed RCM Committee, who have been totally supportive and committed to the challenges which we undertook.

“Yesterday we celebrated all things Midwifery and how we support one another. I’m looking forward to the challenges ahead as I continue as Joint Staffside Chair and RCM Workplace Representative and Branch Secretary.

“I will be retiring as Labour Ward Coordinator in July this year after 30 years practice as a clinical Midwife and as a Registered Nurse before that.

“I am proud to work for SaTH.”

Rebeccah was presented with the award for turning the local branch of the RCM into a flourishing community.

Gill Walton, Chief Executive of the RCM, said: “The Members’ Champion award is hugely important because it gets right to the heart of RCM membership: colleagues supporting each other.

“This year’s award is particularly poignant as it is made in the name of one of our own colleagues, herself a passionate fighter for RCM values, who we sadly lost earlier this year. Rebeccah Davies embodies that same spirit, working hard for fellow Midwives and Maternity Support Workers (MSWs) and leading by example.”

Rebeccah received the award, which is sponsored by Thompsons Solicitors, in a virtual ceremony on International Day of the Midwife. The fellow Midwives and MSWs who nominated her called her a positive role model who has the respect of those around her. She led work to negotiate enhanced contracts for MSWs and secured greater support for community midwives.

Nicola Wenlock, Director of Midwifery at SaTH, which runs the Princess Royal Hospital in Telford and the Royal Shrewsbury Hospital, said: “This is fantastic news and a well-deserved award for Rebeccah. She epitomises everything we want to see in our Maternity service and I am delighted that she has been recognised at a national level.”

Maggie Bayley, Interim Chief Nurse, added: “I would like to add my congratulations to Rebeccah for this richly-deserved award. Colleagues supporting each other help to drive positive change. I am delighted for Rebeccah.”