A new sign has been installed outside the Lingen Davies Centre at the Royal Shrewsbury Hospital (RSH) to help patients who are living with Dementia.

The idea for the sign followed a walkabout by members of the Radiotherapy team who are based within the centre at RSH, and George Rook, Chair of Shropshire Dementia Action Alliance, who were investigating ways to make the department more Dementia-friendly. 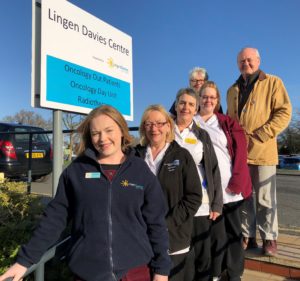 Bernadette Mortiboy, Radiotherapy Technical Superintendent at The Shrewsbury and Telford Hospital Trust (SaTH) which runs RSH, said: “As part of our commitment to improving the experience for our patients who are living with Dementia, we did a walk around the hospital with George.

“The very first thing that we noticed was that there was very little signage to tell patients where they are, and we came up with a number of things that we could do to improve this, including the new sign outside the Lingen Davies Centre. This sign tells people where they are and what is within the centre, including the Radiotherapy Department.”

The sign was paid for by the Lingen Davies Cancer Fund.

Lizzy Coleman, Events and Fundraising Officer at Lingen Davies, said: “It is important to make these little changes which make a positive difference and will benefit everyone.”

George said: “For people who have any sort of sight or cognitive impairment, having a sign outside will make an enormous difference. It is a great start towards making the Lingen Davies Centre and other areas in the hospital dementia-friendly.”