A family has donated more than £500 to create a new room at the Royal Shrewsbury Hospital (RSH), which will provide privacy and dignity for patients at the end of their life. 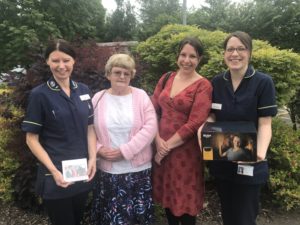 The new Swan Room will be created on Ward 32 Short Stay in memory of Derek Jones, who passed away in December 2018, aged 77.

Derek’s wife Susan, who lives near Ellesmere, and family donated the money from his funeral as well as a CD player and a compilation album of sixties music.

Derek’s granddaughter Caroline Jones, a doctor who works on the Acute Medical Unit at RSH, said: “Being in hospital, particularly when a relative is at the end of their life, is incredibly difficult and a Swan Room helps to create a calm environment for people when their relatives are so terribly ill.

“Granddad received amazing care while in hospital and we hope that the creation of an additional room will make it even easier for relatives when their loved ones are at the end of their life.”

Swan Rooms are a space for patients that are at end of life to use, allowing relatives to spend valuable time with their loved one in a more peaceful and calming environment.

Next month (10 July) will mark the fourth anniversary of the first Swan Room opening at The Shrewsbury and Telford Hospital NHS Trust (SaTH), which runs RSH and the Princess Royal Hospital (PRH) in Telford. They have all been made possible by kind donations from various sources, with the fund so far receiving in excess of £32,000.

Miriam Gilbert, End of Life Care Specialist Nurse at SaTH, said: “I’d like to thank Caroline, Susan and everyone who gave donations to the Swan Fund at Derek’s funeral.

“We have received fantastic support for our Swan Rooms, which are so important for relatives of our patients who are at the end of their life.”

Caroline said: “Miriam was an incredible support to our family throughout Grandad’s stay and with the aftermath. My children were very close to Grandad and they each received a child bereavement bag, which they still adore.”

The bereavement bags for children are filled with a hand knitted teddy bear, colouring pens and a notebook, alongside information on dealing with bereavement, which parents can give to a child so that they can open up conversations about bereavement and grief.

Caroline added: “I received advice on how to manage grief in children, which is not something I had considered before, nor would I know how to approach. Even today, my daughter talks to her little teddy about Grandad and my son utilises his notebook of thoughts.”