Twenty three nurses from SaTH conquered the Wrekin to support and raise awareness of a national campaign to ‘End PJ Paralysis’.

The challenge to climb the Wrekin was organised by PRH Ward 11 manager, Lisa Butler, who managed to rally colleagues to join her on Saturday morning. 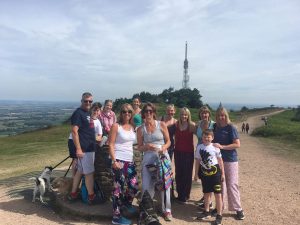 Lisa wanted to do something to highlight the 70-day campaign, which aims to get patients home from hospital quicker.

The walkers, which included a colleague from UHNM at Stoke, celebrated with a much-deserved glass of bubbly when they reached the top – and they toasted the NHS to mark its 70th birthday, on 5 July.

Trust staff have spent the last eight weeks organising various events as part of the campaign, including getting patients to dance to Elvis; dressing in their pyjamas for work and even asking a Disco Beat Instructor to take exercise classes on a ward.

The ‘70 Days to End PJ Paralysis’ campaign was launched by England’s top nurse Professor Jane Cummings on 17 April – and it concludes tomorrow (26 June). Its aim is to get people back home to their loved ones living much happier and fuller lives.

#endPJparalysis, a national campaign originated by Professor Brian Dolan, encourages patients to get up, dressed and moving while in hospital. This helps to prevent the complications of being immobile, including chest infections, muscle degeneration, clotting; as well as shifting patient’s perceptions from ‘I’m sick’ to ‘I’m getting better’.