Nursing staff pulled out all the stops to help a patient get married after her partner proposed while she was being cared for at the Royal Shrewsbury Hospital.

In just over 48 hours, staff from across the hospital helped to organise a registrar to carry out the ceremony, decorate a side room and provide cake and prosecco for the couple to celebrate their wedding; while a Healthcare Assistant helped the bride with her make-up. 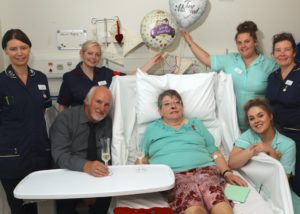 Chris Rogers, and his new wife Marion, have now thanked hospital staff for going the extra mile to help them get married whilst Marion was being treated on Ward 22RE after she fell ill with suspected pneumonia.

The couple, who have been together for more than 30 years, were married by a registrar last week (Monday August 19) when they were joined by their family, and nursing staff, for the ceremony and celebration.

Chris said: “In the back of my mind I knew I wanted to do something to cheer Marion up. On the Friday morning I was talking to the hospital chaplain when he said that the hospital could help with weddings.

“He said that the first thing that I had to do was ask Marion, which I did, and she said ‘Of course I will, I have waited long enough!’ 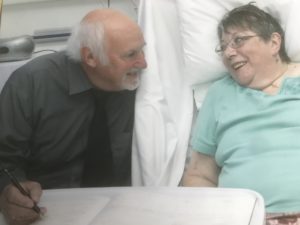 “The staff were brilliant and we can’t thank them enough for making our day so special. They organised so much for us, so quickly – and also special thanks to my Brother-in-Law and Best Man, John Dady.”

Samantha Marpole, Ward Manager of Ward 22RE, said: “It really was amazing. There was lots of teamwork involved to enable Chris and Marion to be married here on the ward.

“They decorated the room with bunting and balloons, and there was even prosecco to toast the.bride and groom, as well as a Best Man’s speech and a photographer, while the catering team provided cakes with just an hour’s notice. It really was a very special occasion, and I am so glad we were able to help them.”

The couple are hoping that Marion will be able to leave hospital once she has recovered, and return to their home in Welshpool.