An innovative new ‘passport’ which enables patients who are at end of life to spend precious time with their pets is being launched in Shropshire’s acute hospitals.

The Pet Passport scheme enables friends and relatives to bring in pets to visit their owners who are patients receiving end of life care at the Royal Shrewsbury Hospital and the Princess Royal Hospital in Telford. 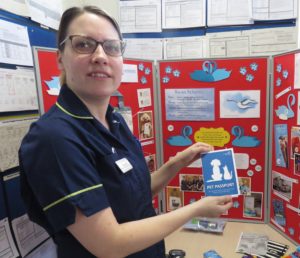 Miriam Gilbert and the Pet Passport

Relatives can show the passport, which is filled in beforehand by the End of Life Care (EOLC) team, on arriving at hospital. It removes the chance of them having what could potentially be upsetting conversations explaining why a pet is coming into the hospital.

The idea has come from EOLC Champion and Ward Sister Teresa Harris, who worked closely with Miriam Gilbert, EOLC Specialist Nurse at SaTH to make the initiative a reality. It is now being rolled out at both hospitals.

Miriam said: “Pets mean so much to their owners so it is only natural for them to want to spend precious time with their animals. It brings the patient comfort at the hardest of times.

“Many people think that they can’t bring pets into hospital, but there are no rules to say that they can’t. In end of life care we have a saying that rules that don’t actually exist can be broken, and that is what the pet passport achieves.”

Miriam added: “The idea for the passport originally came about after relatives, who were bringing in a pet to visit a relative who was at end of life, were asked what the reason was – and they had to have a conversation that was difficult for them. The passport removes the need to have that conversation.”

Jules Lewis, End of Life Care Facilitator at SaTH, said: “Teresa and Miriam have worked hard on this idea which will help bring comfort to those who are at end of life. We only have once chance to get it right for our patients and their families – and this small, simple change will make such a big difference.”