Physics and Radiotherapy staff crowned Team of the Year

The Physics and Radiotherapy team at SaTH has been crowned Team of the Year at a regional awards ceremony, for championing clinical research.

The team, which is based at The Royal Shrewsbury Hospital, won the coveted award at the Clinical Research Network West Midlands Awards 2019, which are run by the National Institute for Health Research.

The awards are held annually to showcase the dedication of teams and individuals throughout the West Midlands in giving people the opportunity to take part in research and help to improve the health of the nation. 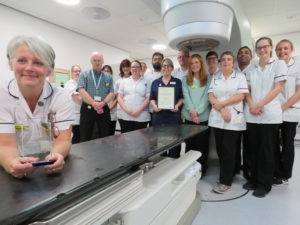 SaTH’s team was recognised for having a ‘can do’ attitude and consistently being a top recruiter in the region for clinical trials involving radiotherapy treatments for cancer patients.

Their nomination said: “The team has a ‘can do’ attitude and relishes the challenges clinical research brings. They truly pride themselves on the significant input to cancer research and understand the benefit and impact radiotherapy trials have on our cancer patients.”

The team is made up of Dosimetrists and Physicists who produce and check treatment plans for patients in clinical trials. An essential part of the team is also the Radiographers who then deliver accurate radiation treatment to tumours in those cancer patients, using state-of-the-art linear accelerator machines.

Their recent achievements include:

Amanda Welsh, Chief Dosimetrist at SaTH, said: “By being part of a clinical trial, it means that our patients are able to access new and better radiotherapy treatments, which can be of great benefit to them. We screen all of our patients to see if they are eligible so that they are given that opportunity.”

Louise Killey, Radiotherapy Services Manager at SaTH, said “The radiotherapy team were all so pleased to receive the nomination. The radiographers were thrilled to then go on to win the award. To be recognised alongside other healthcare disciplines who conduct research within the West Midlands, and be acknowledged as Team of the Year, is fantastic.”

Paul Evans, Head of Radiotherapy Physics at SaTH, said: “The whole team has played a vital role in championing clinical research, enabling our patients to access radiotherapy clinical trials. The results from such trials are essential in improving cancer outcomes for future patients. We are delighted to be recognised for this and to win this award.”