Two quick-thinking porters at the Princess Royal Hospital (PRH) in Telford who helped to save the life of a seven-week-old baby have been shortlisted for an award in The Sun’s Who Cares Wins Awards. 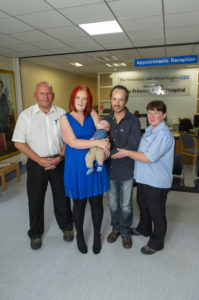 Nick Evans and Ruth Lowe are among the finalists in the Ultimate Lifesaver category having been nominated by Sarah and Mike Clifford for saving their son’s life.

When Baby Logan stopped breathing as the family walked through the main entrance of PRH to visit a sick relative, Ruth shouted for her colleague Nick who grabbed Logan out of his mum’s arms and performed CPR as he ran down the corridor to A&E.

Sarah said: “There are not enough words to say how grateful we are. Without Ruth and Nick’s quick thinking we wouldn’t have our baby son here today; it would have been a completely different story.

“I have thanked them a million times but it will never be enough. They’re my heroes.”

Nick, a porter for 30 years, said: “I’ve done CPR on adults before but never on a child. It made me emotional.”

Ruth added: “Hearing him cry was such a relief.”

The annual awards, now in their third year, were set up to allow its readers to pay tribute to the selfless medics, researchers and volunteers who have touched – or in many cases – saved their lives.

Paula Clark, Chief Executive at SaTH, the Trust that runs PRH and the Royal Shrewsbury Hospital, said: “Everyone at the Trust is immensely proud of Nick and Ruth whose quick thinking actions that day helped a family in their hour of need. We wish them all the best and hope they win the award.”

This year, The Sun received a record number of nominations from readers keen to thank their health heroes.

The judging panel – made up of TV doctor and NHS GP Dr Dawn Harper, Professor Chris Moran, the National Clinical Director for Trauma in England, and Chief Midwifery Officer for England, Professor Jacqueline Dunkley-Bent have whittled entries down into a shortlist.

The winners will be announced tonight (Tuesday 8 October) at our star-studded gala awards bash, held at The Sun’s headquarters, The News Building.