A popular art trail featuring larger than life ducks is now bringing smiles to the faces of young patients at the Princess Royal Hospital in the form of a specially-created mural. 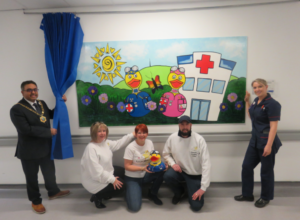 The unveiling of the mural at PRH

The original Let’s Go Quackers trail, made up of a collection of 10 giant painted ducks was a popular attraction in Ironbridge and Telford’s Southwater earlier this year.

Organisers have now created a lasting artwork featuring a painting of one of the giant sculptures – Dr Duck – which has gone on display in the corridor at the Shropshire Women and Children’s Centre.

Dr Duck was designed by Charlton School pupil James Harwood, 13, whose idea was developed into an exhibit by artist Nicky Meechan.

Julie Ward, who had the idea for Let’s Go Quackers, said: “It was a lovely event. Everyone seemed to like the new mural, which I would described as an injection of fun on the wall. It features bright colours, and the nursing staff were thrilled with it.

“Let’s Go Quackers has really got a life of its own. Although the ducks have been auctioned, some of them have returned to Southwater. And this mural will be a lasting public display for people at the hospital to enjoy.”

Lisa Gilks, Children’s Ward Manager, said: “We are incredibly lucky to have been donated this mural. It’s brought an amazing splash of colour so that when children are coming in they immediately get the feeling that it’s fun and friendly and not as daunting as they might think.”

Guests at the unveiling ceremony included the borough’s mayor Councillor Raj Mehta and representatives from mural sponsor Telford-based building supplier MKM. Other sponsors are Telford based Runtime UK which donated the plaque and varnish supplier Urban Hygiene Ltd, of Doncaster.