A charity shooting day at one of the country’s most prestigious clay target facilities raised £6,500 for the Cardiology Fund at Shropshire’s two acute hospitals. 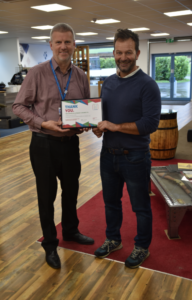 The event on Saturday 28 September was organised for staff at The Shrewsbury and Telford Hospital NHS Trust as a thank you for the “great care” that Jonathan Williams, Director of Mid Wales Shooting Centre, received after suffering a heart attack earlier this year.

Jonathan said: “The charity day was a huge success and with the support of local and national companies, the generosity of the shooters and visitors and a very successful raffle, we raised £6,500 for SaTH Charity’s Cardiology Fund.”

The Sporting Open High Gun was won by Paul Hutchinson and the Joint DTL High Guns was won by Russell Vaughan and Andrew Greenstock.

Jonathan added: “I am delighted we have been able to give something back to the Trust in recognition of the great care I received. Everyone I met when in hospital was amazing, they took great care of me after I suffered a heart attack while running along the beach from Aberdyfi to Tywyn.”

Mid Wales Shooting Centre, near Newtown, is situated in over 300 acres and over the past 20 years has played host to World, European, British, Welsh and English Championships.

Andrew James, who heads up the SaTH Charity, said: “On behalf of everyone at the Trust, which runs the Royal Shrewsbury Hospital (RSH) and the Princess Royal Hospital (PRH) in Telford, I would like to say a huge thank you to Jonathan and everyone at the Mid Wales Shooting Centre.

“This extremely generous donation will be gratefully received by the department. It will help the team continue to provide great patient care. The fact the money was raised during a fun day out for our staff make it even better.”

SaTH Charity is a registered charity that makes a real difference to the patients, affected friends and family, and members of staff at RSH and PRH.

To find out more about SaTH Charity and how to raise funds for your local acute hospitals, please visit https://www.sath.nhs.uk/about-us/charity/