A Shropshire business has donated a football table and a large selection of cuddly toys to the Children’s Ward at the Princess Royal Hospital (PRH). 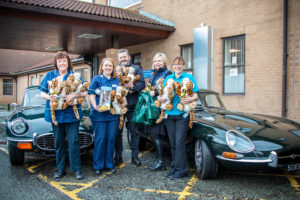 Staff at Jaguar parts manufacturer and supplier SNG Barratt, based in Bridgnorth, raised the money to improve the experience for patients receiving treatment on the Children’s Oncology Unit at PRH.

Sarah Kirby, Marketing Assistant at SNG Barratt, who spent time on a Children’s Oncology Unit with her daughter, Jessica, many years ago, said the delivery of a new football table for the games room on the Children’s Ward, as well as several cuddly jaguar toys and bags of chocolate, was only made possible thanks to the generosity of her colleagues.

She said: “I know first-hand what it is like to have a child on an oncology ward and know the importance of donations. Everyone at SNG Barratt has been incredibly generous and we hope these gifts will help improving the experience for the children on the Children’s Ward. 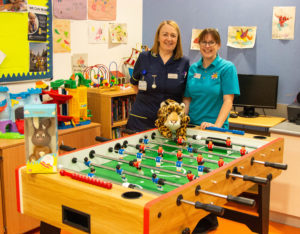 Janice Llewellyn, Paediatric Haematology/Oncology Clinical Nurse Specialist (left) and Dawn Walder, from the Play Team at the Children’s Ward, with the new football table that has been donated for the games room inside the Children’s Ward at PRH.

“The staff on the ward are excellent and you can’t underestimate the work done there every day. You can see the children’s eyes light up at the tireless, thankless work that the staff here do.”

Janice Llewellyn, Paediatric Haematology/Oncology Clinical Nurse Specialist at The Shrewsbury and Telford Hospital NHS Trust (SaTH), which runs PRH and the Royal Shrewsbury Hospital, said: “We’re always very grateful when we receive such a kind donation as this.

“The children have already enjoyed playing on the new football table, while the cuddly jaguar toys have gone down a treat. We gave the first of the toys to a little one-year-old boy currently receiving treatment and he was thrilled with it, as was his mum. It was lovely to see.”

Sarah Kirby was joined at PRH by her colleague Peter Stant, and as well as the donation they put on a spectacle for staff by arriving in two classic Jaguar cars.

Janice added: “It was a really lovely event and on behalf of everyone at SaTH I’d like to say a huge thank you to everyone at SNG Barratt.”

If you’re feeling inspired to fundraise for your local hospitals, call the fundraising team at SaTH Charity on 01743 261 000 (extension 1473) or email sath.charity@nhs.net