Staff room with a difference for hospital colleagues

Colleagues working on a ward at the Princess Royal Hospital (PRH) in Telford can now take their breaks in a staff room with a difference.

A ‘Royal Dome’ pod has been installed outside the Acute Medical Unit (AMU) where staff can now go to rest during their shifts. The dome is fully equipped with heating and lighting – so the AMU team will be able to use it all year round. 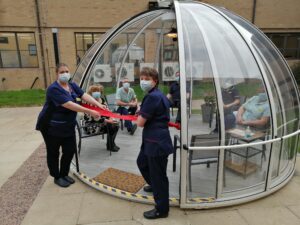 It has been funded by charitable donations including funds raised for NHS Charities Together by Captain Sir Tom Moore, which were then donated to SaTH Charity to support the work of the PRH and Royal Shrewsbury Hospital – run by SaTH.

It has also been furnished using money from SaTH’s Small Things Make a Difference Fund – set up to improve the working lives of staff.

Debbie Archer, AMU Matron, said: “We have been without a staff room for some time, so we were absolutely delighted with our new pod.

“On behalf of my colleagues, I would like to thank all those who have donated to SaTH Charity, and in particular recognise Captain Sir Tom whose fantastic efforts have also contributed to this.”

Kerry Tasker, AMU Ward Manager, said: “The dome has already proved to be a real hit with our staff as it means that they are now able to take a well-earned break away from the ward in their own special area.”

Julia Clarke, Director responsible for SaTH Charity, said: “We think this is a brilliant utilisation of the funds raised for the NHS by Captain Sir Tom and by all those who have supported SaTH Charity. It has made a huge difference already to our staff who have worked so incredibly hard throughout this pandemic.

“I hope that SaTH Charity will be able to fund more of these domes in the future as ensuring our staff have access to rest facilities is vitally important for their health and wellbeing.”

SaTH Charity has so far received over £120,000 from NHS Charities Together.

It has helped to fund schemes including televisions for patients unable to have visitors due to current COVID-19 restrictions, picnic benches to enable staff to get outside and welfare support through a counselling service operated through the Trust’s Hamar Help and Support Centre.

A further £50,000 was also secured from NHS Charities Together to support a social inclusion project to help the Trust connect with hard to reach groups.