A surgeon at Shropshire’s acute hospitals is leading the campaign in the county for a new cycling velodrome to be built in the West Midlands ahead of the 2022 Commonwealth Games. 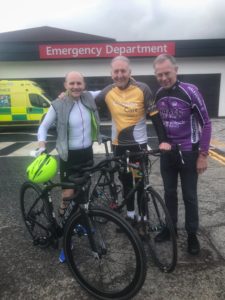 Richard Roach, who has worked at The Shrewsbury and Telford Hospital NHS Trust (SaTH) for 14 years, is involved in the campaign following the decision to hold the cycling events at London’s Lee Valley Velopark instead of constructing a new venue in the West Midlands.

A petition to build a velodrome in the West Midlands has gathered over 6,000 signatures and will soon be handed over to Birmingham City Council.

Mr Roach, an orthopaedic surgeon at the Trust which runs the Royal Shrewsbury Hospital (RSH) and Princess Royal Hospital (PRH) in Telford, said: “When it was confirmed that Birmingham would host the 2022 Games I was delighted as it will be a huge boost for the region, including Shropshire, Telford & Wrekin and Mid Wales.

“As a healthcare professional and a keen triathlete I am in favour of anything that encourages people to become more active. The health, fitness and wellbeing of local people is of extreme importance to me. The region has a higher than national average of inactivity in adults.

“I am determined that the people who live in this area should gain the maximum possible benefits from the Commonwealth Games. This is the sort of legacy the 2022 Commonwealth Games should be having on Shropshire and the West Midlands.

“I recently travelled to Manchester to use their velodrome and as I got off the track a class of 20 school children entered. The soft ball courts in the centre were in constant use. The public could also train and GB team were also in attendance.”

The campaign also has the support of one of Great Britain’s greatest ever competitive road cyclists – Hugh Porter MBE.

Mr Porter, who visited PRH last week as part of the campaign, won four world titles in the individual pursuit—more than any other rider—as well as a Commonwealth Games gold medal in 1966. He was also the recognisable voice of cycling commentary until recently and is an ambassador for cycling.

He is promoting his Compton Care bike Sportive for all ages in May 2019 ‘Round the Wrekin’.. More information can be found at www.comptoncare.org.uk/support-us/fundraising/events/bankss-round-wrekin-sportive-2019/

Mr Roach added: “SaTH’s mission is to have the healthiest half million population on the planet. As a healthcare professional of many years I do my bit every day to help take us a step closer to achieving that mission.

“However, we need the help of others if we are going to get close to achieving what is an incredibly ambitious statement and that is why I would encourage everyone to sign this petition.”