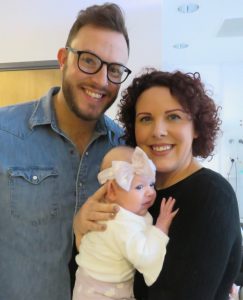 Luke and Abigail with Betsy

She was born almost four weeks prematurely by emergency caesarean at the Princess Royal Hospital (PRH) in Telford, after her mother Abigail Hulme suffered a rare, life-threatening complication during labour.

Abigail, of Newport, had suffered a uterine rupture – a condition which affects less than 1% of all births – causing Betsy to dangerously slip into her abdomen.

Abigail and her partner Luke Cheal, say that medical staff reacted instantly, saving both her life and Betsy’s. This week they returned to the PRH to say thank you to Dr Will Parry-Smith, Obstetrics and Gynaecology Registrar at the Shrewsbury and Telford Hospital NHS Trust (SaTH), who performed the caesarean, and midwives Leona Gollins and Abi Panayi. 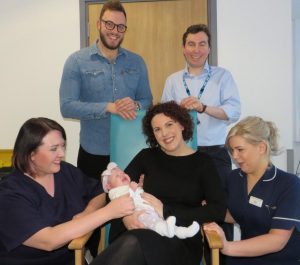 “After my waters had broken, I was admitted to PRH. I had to be induced, and was labouring well, but then I started to feel terrible pains between my contractions, and they could find no stable heart rate for Betsy,” said Abigail, who is also mum to five-year-old Daisy.

“As soon as they had pressed the emergency button, we were in theatre in minutes. Betsy was in my abdomen and had been there for eight minutes. Will is our hero, he saved our lives. They are all our heroes, they were amazing. 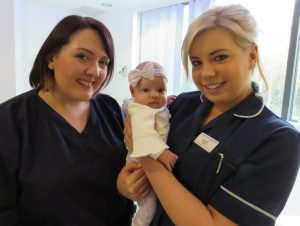 Midwives Leona and Abi, with Betsy

“It wasn’t just the birth; the aftercare we received from everyone was just amazing too. Luke was allowed to stay and they found a bed for him so he could be with us. I honestly cannot credit the hospital enough. We were treated with absolute care and respect.

“It was lovely to be able to come back in to say thank you from the bottom of my heart to everyone who had helped us. I am eternally grateful to each and every one of the staff who helped us. Their constant support of myself and Luke will never be forgotten.” 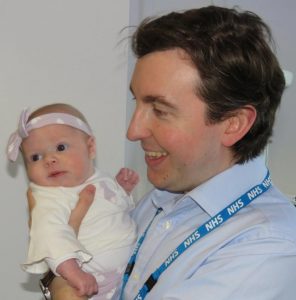 Dr Will Parry-Smith with baby Betsy

Dr Parry-Smith said: “Abigail developed a life threatening complication during her labour. An emergency caesarean section was required to ensure the safe delivery of baby Betsy and wellbeing of Abigail. The team at SaTH worked rapidly and skilfully together to keep mum and baby from harm. Uterine rupture is a rare but serious complication that through team work, training and professionalism on this occasion had a good outcome. It was a delight to see baby Betsy and her parents again; we always enjoy seeing our patients and families again.”

Betsy was born weighing 6lbs at 8.24pm on November 5 last year. “She is such a contented baby and is already sleeping through. She is our little miracle,” added Abigail.