Thrillseeker Debbie takes to the skies to raise money

Thrillseeker nurse Debbie Snooke jumped 10,000 feet from a plane in a tandem skydive to raise funds for the Swan Fund, but this was not her first skydive … it was her third.

Debbie, a Swan End of Life Care Specialist Nurse at SaTH, raised £477 for the fund and £200 of the funds raised will be donated to the bereavement fund in the maternity unit at PRH. The remaining money will be used to purchase additional items which make a difference to our patients receiving End of Life and the people important to them.

She said that the money will probably go towards CD Boomboxes for all Trust wards.

Debbie who skydived at Tilstock Airfield near Whitchurch said: “I am now planning my fourth skydive this year. The more skydives I do the more I love it – and it is just great to raise money for causes close to my heart.”

The funds raised from a previous skydive provided a mood light for every ward at  the Trust.

The Shropshire Round Table Lodge also very kindly raised £250 which has been used to buy five CD Boomboxes. Debbie had cared for the mother of Steve Pritchard-Jones, a member of the lodge, in the last days of her life. Steve’s sister Karen Thompson also made a donation of two CD Boomboxes.

Debbie said: “I had the privilege of caring for Steve and Karen’s mother in her last days of her life and this was the reason for their very kind donation.”

She also received a separate donation for the Swan Fund just before Christmas from the family of late John Jones. The family also donated £200 to the Dementia Team.

The Swan End of Life Care specialist nurses are currently considering what can be purchased with the money donated by Eileen Jones and her family in memory of John who was known to his family and friends as Squigee. 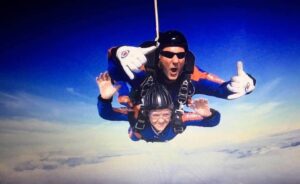 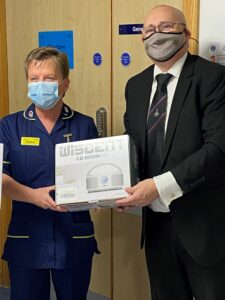