Staff and patients on the Children’s Ward at the Princess Royal Hospital (PRH) in Telford didn’t expect to see Tigers at this time of year – especially Tigers handing out gifts. 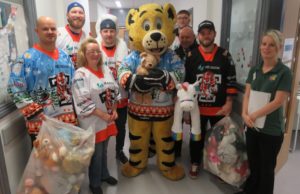 The Telford Tigers delivered 200 teddy bears to the Children’s Ward. They are pictured with Jodie Frost (Play Practitioner).

But they were actually members of the Telford Tigers ice hockey team, who had taken time out of their busy training schedule to visit the Children’s Ward.

The players spent time chatting with the children and having their pictures with them, and delivered soft toys that had been collected from their annual ‘teddy toss’.

The Telford Tigers encouraged their fans to throw teddy bears onto the ice after they scored their first goal in their home games against Blackburn Hawks and Sheffield Senators earlier this month. Across the two fixtures more than 200 toys were thrown on the ice.

Head Coach Tom Watkins said: “It’s something that is big in North America and we’ve been doing it for a number of years now. We have collected close to 1,000 soft toys in total over the years.

“It’s just nice to give a little bit back to the community and those in need.

“It is a really humbling thing to do and it helps spread that Christmas spirit.”

Jodie Frost, Play Practitioner at PRH, said: “This is the third year the team have come to see the children.

“We can’t thank them enough for the generous gifts.

“The children have loved meeting members of the team.”

Staff on the Children’s Ward would like to say a big thank you to all the local companies who have donated gifts this year.