Trust awards set to celebrate 70 years of the NHS

Shropshire’s two acute hospitals will celebrate the achievements of staff and volunteers at a very special awards ceremony which will also mark the 70th anniversary of the NHS. 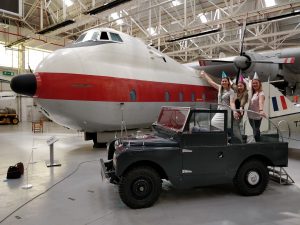 The annual Values In Practice (VIP) awards held by The Shrewsbury and Telford Hospital NHS Trust (SaTH) will this year take place in one of the hangers at RAF Cosford and will be themed to tie in with the national NHS70 celebrations.

The NHS was founded on 5 July 1948 and SaTH, which runs the Royal Shrewsbury Hospital (RSH) and the Princess Royal Hospital (PRH) in Telford, has been marking the occasion throughout the year, beginning with a Big 7Tea tea party for volunteers.

On 7 July, SaTH will be hosting a charity Fun Day and Fun Run at RSH, and the Trust’s NHS70 celebrations will culminate with the staff celebration at RAF Cosford on 28 September.

Nominations are being invited in eight categories:

Simon Wright, Chief Executive at SaTH, said: “Every day across our hospital, we see remarkable acts from individuals and teams, and this is our small way of saying ‘thank you’.

“This year, as we mark 70 years of the NHS, it is even more important that we recognise the dedication, devotion and care that our people display in what we all know can be very trying circumstances.

“I am delighted that RAF Cosford have agree to allow us to hold the event in one of their hangers. This fantastic setting, amongst some wonderful historic aircraft, will certainly add to the sense of occasion for all the finalists.

“The nominations we have received in previous years have been incredible, and it has been a very hard task to choose the winners. I have absolutely no doubt that this year, we will again receive some exceptional nominations.”

Nominations can be made via the Values in Practice website at https://awards.sath.nhs.uk/. There will also be nomination boxes at both hospitals for people to post written nominations. Nominations closes on 27 July.