SaTH is part of a national programme which aims to reduce the incidence of cerebral palsy in pre-term babies.

It means that mums-to-be who go into early labour (before 30 weeks) will be offered magnesium sulphate during their labour to help reduce the risk of cerebral palsy in their babies.

The Trust has launched PReCePT (The Prevention of Cerebral Palsy in Pre-Term Labour) programme on its Delivery Suite at the Princess Royal Hospital (PRH) in Telford.

Leona Gollins, Lead Midwife for PReCePT at SaTH, said: “PReCePT is a national programme which aims to offer eligible women in pre-term labour magnesium sulphate for the prevention and reduction of the severity of cerebral palsy. 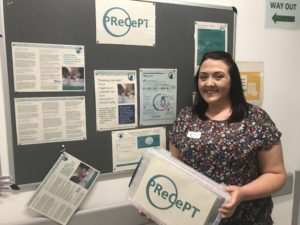 “The programme has now been launched on the Delivery Suite and involves the training of all midwives and doctors working in maternity so that more women can be offered magnesium sulphate.

“We have created a display board and grab box containing the drugs available to assist our staff. A leaflet is also available for women who may have a pre-term labour.”

PreCePT is a national quality improvement project, funded by NHS England, designed to reduce the incidence of cerebral palsy through improving the uptake of magnesium sulphate, which is given to mothers who go into early labour.

The programme was developed by the West of England AHSN (Academic Health Science Networks) in collaboration with University Hospitals Bristol NHS Foundation Trust, and involved both patients and staff. It was launched in the West Midlands in March 2019 with SaTH, which also runs the Royal Shrewsbury Hospital, being one of the Trusts included in the scale-up.

Between 4,000 and 5,000 babies are born before 30 weeks’ gestation in England a year, and the successful scaling up of PReCePT is likely to prevent several hundred cases of cerebral palsy per year, based on highest grade evidence.