A conference held in Shropshire to look at ways to improve care for people living with dementia has proved a huge success. 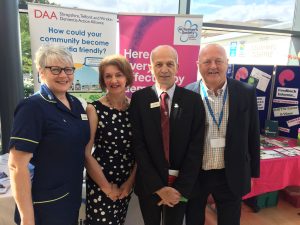 Around 200 people attended the conference – Changing Dementia Care –at the Shropshire Conference Centre at the Royal Shrewsbury Hospital yesterday (18 May 2017).

Delegates took part in a range of workshops as well as hearing presentations from keynote speakers including Chris Roberts and Jayne Goodrick, who featured in an extraordinary BBC Panorama documentary about living with dementia.

Chris and Jayne gave a passionate, emotional and often funny talk about how they had learned to become experts in the condition following Chris’s diagnosis – but the many obstacles they had discovered in helping Chris to live with his condition.

Yesterday’s conference was the latest to be hosted by The Shrewsbury and Telford Hospital NHS Trust (SaTH) as it continues to look at innovative ways of improving patient care not only at its two hospitals – the Royal Shrewsbury Hospital (RSH) and the Princess Royal Hospital (PRH) in Telford – but also in the wider community.

Karen said: “A quarter of patients in our hospitals live with a dementia or some form of confusion. We are working to ensure that those patients, and their carers, receive the individualised and sensitive care that is appropriate to their needs, to help to ensure that their stay in hospital is no longer than it needs to be.

“This conference was a great opportunity to bring together experts in their field and – more importantly – people living with dementia to find out what is good about their care, and what needs to change for the better.

“There was a really great buzz at the Conference Centre during the day and there has also been some wonderful interaction on social media. Dementia is something that can affect everyone, whether it is the person with the diagnosis or their loved ones, and it is vitally important that we talk about it.”

The conference included the launch of a Dementia Chater for SaTH and the relaunch of John’s Campaign. In 2015, The Royal Shrewsbury Hospital and Telford’s Princess Royal Hospital were two of the first 35 hospitals across the country to be highlighted by John’s Campaign, for allowing the families and carers of people with dementia to remain with patients in hospital for as long as possible.

At the two Shropshire hospitals, carers are welcome outside normal visiting hours on all medical and surgical wards.

SaTH also has a number of other initiatives to support people living with dementia. In September last year, the Trust launched its Living Well With Dementia appeal. The three-year appeal aims to raise £2.6 million to provide a number of benefits for patients to improve ward and outpatient departments so that they are dementia friendly.

Work will include improvements to the ward and outpatient environments to make them dementia friendly, new clocks, colour-coded hand rails and toilet seats, improved signage, new crockery and cutlery and reminiscence items.

This will build on other initiatives developed by SaTH in recent years, including: