Two members of staff at the Trust which runs Shropshire’s acute hospitals are to take on the 2020 London Marathon to raise money for children’s charities. 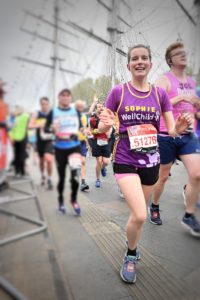 Sophie Parr and Caroline Jones will both take their place on the start line of the world’s most famous road race on 26 April next year.

Sophie is a nurse on the Neonatal Unit at the Princess Royal Hospital (PRH) in Telford. She is raising money for Bliss, which supports families of babies who are born premature or unwell.

Caroline is a doctor on the Acute Medical Unit (AMU) at the Royal Shrewsbury Hospital (RSH) and is fundraising for the NSPCC.

PRH and RSH are both run by The Shrewsbury and Telford Hospital NHS Trust (SaTH).

Sophie, from Shrewsbury, has been running for 10 years.

She said: “I started running ‘properly’ at 16 to get fitter and have carried it on ever since. In the last few years I’ve been hampered with a few injuries, which has caused me to swap running to get good times and record new achievements to just doing it for the pure enjoyment.

Sophie also took part in the 2019 London Marathon, but says it came at the wrong time.

She said: “I picked the wrong year to do my first full road marathon because in the four-month build up to it I also left my job, started working at PRH, bought my first flat and went to Kenya to do charity work.”

Sophie decided to fundraise for Bliss through seeing the work they do.

She said: “I see Bliss doing brilliant work almost every day through my work. The support provided by the charity helps parents and families deal with the stressful situation that is having a little one in the Neonatal Unit.”

Anyone who wants to support Sophie can do so on her online fundraising page at uk.virginmoneygiving.com/SophieParr1 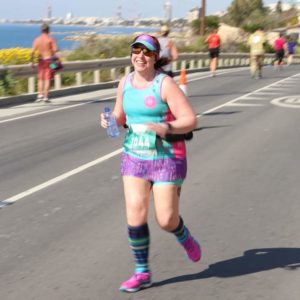 Caroline, who also lives in Shrewsbury, started running two years ago – around the same time that she joined the team on AMU.

She said: “I did my foundation programme here nine years ago and, after a little time away in other hospitals and having children, I have returned ‘home’.

“When I started running, it was more of a ‘give it a go’ thing. I had no intention of racing –  I could barely manage 10 seconds without wanting to sob in a heap on the pavement.

“I used the NHS ‘Couch to 5k’ app and built up my distance and time, and a year later I entered the Birmingham Half Marathon and found my addiction to races. I find running great to help with stress.

“Every year, I cheer on my colleagues who enter the London marathon and recently had a twinge of jealousy: ‘I want to do that!’ I was so inspired by the previous runners that I entered on the day.”

Caroline has been inspired to raise money for the NSPCC as a mother and primary school parent governor.

She said: “The NSPCC is a charity that should never be needed but we are lucky that we have such a wonderful organisation to support parents, children’s organisations and our children whether it’s for advice, education or reporting concerns. The NSPCC even runs Childline – a service that I am sure we can all recall from our school days.

“In a world which is far more virtual than when I was little, the NSPCC is at the forefront of promoting internet safety, teaching both children and parents how to keep safe online. This is why I want to run and fundraise for them, as they do such amazing work for all our children.”

Caroline also has an online fundraising page, which can be found at uk.virginmoneygiving.com/CarolineJones66