Shropshire’s two acute hospitals have signed up to gain accreditation for a covenant that ensures the best care for people who are serving, or who have served, in the British Armed Forces. 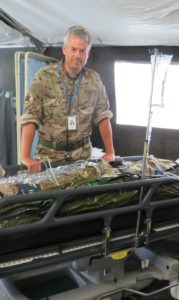 The Shrewsbury and Telford Hospital NHS Trust (SaTH), which runs the Royal Shrewsbury Hospital (RSH) and the Princess Royal Hospital (PRH) in Telford, has signed up to become a ‘Veteran Aware’ trust.

Veteran Aware trusts are leading the way in improving veterans’ care within the NHS, as part of the Veterans Covenant Healthcare Alliance (VCHA).

Dr Kevin Eardley, a Consultant Physician and Nephrologist at SaTH and a Major with 202 Field Hospital, is leading the work.

He said: “Every day we have many serving military personnel and veterans entering our hospitals. Usually their career or past service has no consequence on the care they receive, but on occasions it does and with significant implications.

“Understanding that these patients, and their families, may have particular needs will help ensure we provide the very best possible care for them. It will ensure that their service doesn’t negatively impact their access to the right care, which is the basic principle of the Armed Forces Covenant.

“In partnership with local authority Armed Forces Covenant Committee leaders, local charities and 202 Field Hospital (Army Reserve) we have embarked a long term programme of work committed to increasing our staff’s awareness of the Armed Forces Covenant and of the particular needs of veterans and serving personnel.”

An early part of that work has been the recruitment of over 30 Veterans Aware Champions, many of whom are either veterans themselves or have been closely associated with the military for other reasons.

If you wish to become a Veterans Champion please email sath.armedforceschampion@nhs.net and we will invite you to future training events in the New Year. 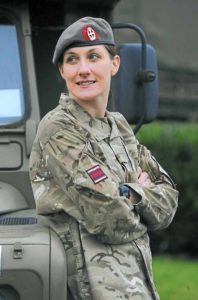 Emma Howells, Clinical Site Manager, joined what was then the Territorial Army in 2011.

She said: “In January 2014, after two years of pre-deployment training, I was ready to embark on Op Herrick 19b to Afghanistan, as a Ward Nurse and as one of five members of the platelet apheresis (used for blood transfusions) team.

“Our deployment lasted four months. After a couple of months’ post-deployment training, I returned to my role as Nurse on Ward 24 at SaTH.

“I had a challenging but thoroughly enjoyable time on deployment where I worked in amazing teams and learnt many new skills.

“Returning to work as a Veteran made me apprehensive – not knowing if I would remember the skills required to do my previous role, and whether the my team would allow me to ‘fit’ back into the ward environment. Would some experiences from Afghanistan hinder my performance back in civilian life? Fortunately, the team were incredibly supportive.

“When I saw the email asking for ‘Armed Forces Champions’ I was thrilled as Armed Forces, and in particular Veterans, is something I am very passionate about. There are many Veterans, and their families, who do not know what help is available, where they can go for advice, or even how to make get to know people in the same position as them.

“Raising awareness and signposting is a big aspect of this role. If we can care for those that gave us today I feel we are giving something back for their tomorrow, which really makes us proud to care.”

This site uses cookies to store information on your computer. You will need to consent to cookies in order to use key functions of this website, otherwise they may not work correctly. More information can be found by reading our privacy notice.I accept cookies from this site