VIP Awards for staff who went the extra mile

Two members of staff have been commended for the kindness they showed to a patient.

Sean Evans and Sam Kirk, who work in the Trust’s IT department based at the Royal Shrewsbury Hospital, received a call to help the patient who they initially thought was struggling to watch a video on his lap top computer. 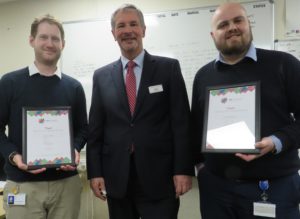 It was only when they visited the patient that they learned he was trying to watch the funeral of his wife via the lap top as he was unable to attend – and which was due to start.

Sean said: “A call came in from one of the wards regarding a patient who was trying to view a video on his own personal device, but it wasn’t working. We went to the ward to see the patient who said he was trying to view live footage from his wife’s funeral. We knew straight away that we had to get this right for him.

“He had been trying to install something onto his laptop that would allow him to watch but it wouldn’t work so we took it back to the IT office to see if we could fix it. It still wouldn’t work, so we managed to locate and set up a Trust laptop for him – however when we went back to the ward, we found that it wasn’t working either.

“I was starting to worry about what we could do. When it got to two minutes before the funeral was due to start, I managed to set up my phone and I left it with him for the hour so he could watch it.

“It was a very humbling experience to be able to help him, and he was very emotional and grateful for our help. We did not want to let him down and it was a real team effort.”

Giles Madin, Joint Acting Head of IT at SaTH, said: “Sean and Sam really put the Trust’s values into practice to be able to help the patient, and both of them thoroughly deserve to be recognised for their efforts and determination.”

Sean and Sam were each presented with a VIP (Values in Practice) Award by Trust Chair Ben Reid, who commended them for going the extra mile to help the patient.