The Shrewsbury and Telford Hospital NHS Trust (SaTH) is ranked fourth in the NHS for its involvement in a scheme which encourages the recycling, reusing or rehoming of old equipment. 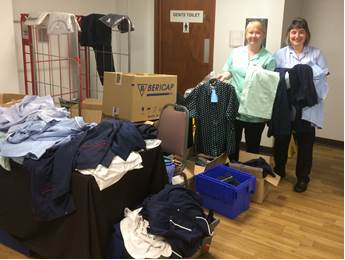 SaTH uses a system called Warp-it to make it easy for staff to give surplus items that they no longer need to colleagues in the Trust.

As a result of the scheme, SaTH is now one of the few trusts that has saved club £250,000, ranking it fourth overall in the whole NHS.

Alex Ford, from the Warp-it team, said: “As a result of ‘Declutter Days’ organised by the KPO team on both hospital sites during December, we had a huge amount of uniforms returned, with around 99% being brand new and still in their packaging.

“So we came up the idea of holding uniform rummage events, one at PRH and one at RSH. Staff where fantastic –we found homes for 105 different uniforms and the event created such a positive buzz on the day.”

So far, more than 900 staff have joined our recycling and re-use community and its thanks to your efforts that  we have managed to prevent 39 tonnes of waste going to landfill and 99 tonnes of carbon entering the atmosphere.

Feedback includes comments like: “I found using Warp it very easy and straight forward to use and it has worked very efficiently. I will be recommending it to my colleagues within the department.”

And: “It is my first port of call if we need anything for the offices. It is always worth seeing if any pre-loved items could be given a home before spending unnecessarily on new items. The system works for us.”

Items that can be reused through Warp-it include furniture, electrical equipment, fixtures and fittings and office consumables (such as stationery, ink jet cartridges, new clothing).