The Shrewsbury and Telford Hospital NHS Trust (SaTH) is looking for people for whom 1948 was a particularly special year. 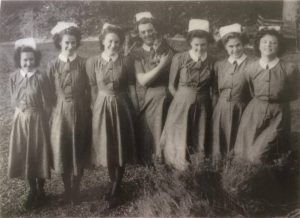 Student nurses in Shropshire, who trained between the years of 1948 (the year the NHS was created) and 1951.

As part of its plans to celebrate the 70th anniversary of the NHS, SaTH wants to hear from anybody who was working in the health service when the NHS was formed – or anyone who was born in 1948, following the creation of the National Health Service on 5 July.

The Trust, which runs the Royal Shrewsbury Hospital (RSH) and the Princess Royal Hospital (PRH) in Telford, wants to record people’s memories of life in the NHS for future generations. It is hoped this will form part of the centrepiece of SaTH’s celebrations – an NHS70-themed fun day which will take place at RSH on 7 July.

Julia Clarke, who is overseeing the fun day and NHS70 celebrations, said: “The NHS remains one of the most treasured institutions in the country and is still revered around the world. This is almost entirely thanks to the fantastic men and women who work – and have worked – in it.

“Our plans to celebrate the 70th anniversary of the NHS are quickly taking shape and a key part of that will be hearing the stories of those who were there at its inception.

“If there is anyone living in Shropshire, Telford & Wrekin or Powys who worked in the health service in 1948 and witnessed the creation of the NHS first hand, we would love to hear and share their stories.

“Equally, we would love to hear from anyone who was born into the NHS when it was first created. You never know, we might even find the first baby born in the NHS in Shropshire!”

The highlight of SaTH’s NHS70 celebrations will be a charity fun day in aid of the Trust’s Living Well With Dementia appeal and Swan Fund for end of life care, which will take place at the Shropshire Conference Centre at RSH on 7 July.

The fun day will include family stalls and attractions, as well as a fundraising element in the form of a 5km circular charity walk or run and a separate cycle ride. The event, which is being organised by a team of volunteers, is being held at Shropshire Conference Centre, as it provides the opportunity for events to be moved indoors in case of bad weather.

A unique sculpture to mark the 70th year of the NHS will be unveiled at the fun day thanks to a special partnership with the British Ironwork Centre near Oswestry. The centre has agreed to make a striking sculpture using obsolete hospital equipment such as old blood pressure monitors, parts of hospital beds, surgical hands, microscopes, a former anaesthetic machine, a broken dialysis machine and wheelchairs.

The design of the sculpture will be selected by a panel who will consider ideas put forward by members of the public and staff at SaTH.

Other events to celebrate the 70th anniversary are also being planned and will be announced throughout the year.