A teenager who climbed the Wrekin with her friends to mark her 16th birthday has raised £350 for the hospital team who saved her life when she was just six-weeks-old. 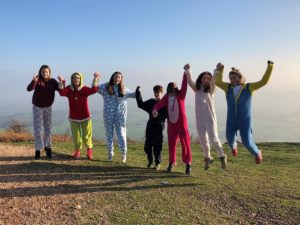 Harriet and her friends at the top of the Wrekin

Harriet Bagguley took the challenge to raise money for the Children’s Ward at the Princess Royal Hospital in Telford.

She also asked for donations for the ward instead of presents for her 16th birthday.

Harriet, who is a prefect at Haberdashers Abraham Darby in Madeley, Telford, was admitted to hospital when she was just six weeks old, weighting 6lbs, because she was constantly bringing milk back up.

She was diagnosed with pyloric stenosis, a condition where the passage between the stomach and small bowel becomes narrower, which stops milk or food passing into the bowel to be digested. If the condition is not treated, the baby will become dehydrated and not gain weight.

Harriet’s mum, Charlotte, said: “It was something of a chance diagnosis by a junior doctor, as the condition is usually only found in first born males, and Harriet has an older brother.

“Following the diagnosis, Harriet underwent an operation and is now fit and healthy.”

Harriet said: “I wanted to do something to raise money for the hospital because without them, I wouldn’t be here. I asked my friends and family to join me on the sponsored walk up the Wrekin and asked for people to donate to the hospital instead of giving me presents.”

Lisa Gilks, Children’s Ward Manager, said: “We are incredibly grateful to Harriet for such a selfless act.”